Vinh Luong may only be a freshman computer science student at the Dietrich School of Arts and Sciences, but he has already worked for three startup companies and expects to have a few of his own under his belt before long.

“The level of creativity, of energy, of innovation is far more enticing in a startup than working at any other standard job,” Luong said.

So it should not come as a surprise that his idea for a software platform to monitor water temperature, acidity and nutrient levels in aquaponics systems took the top prize of $2,500 in the Startup PittBlitz sponsored by the Pitt Innovation Institute. 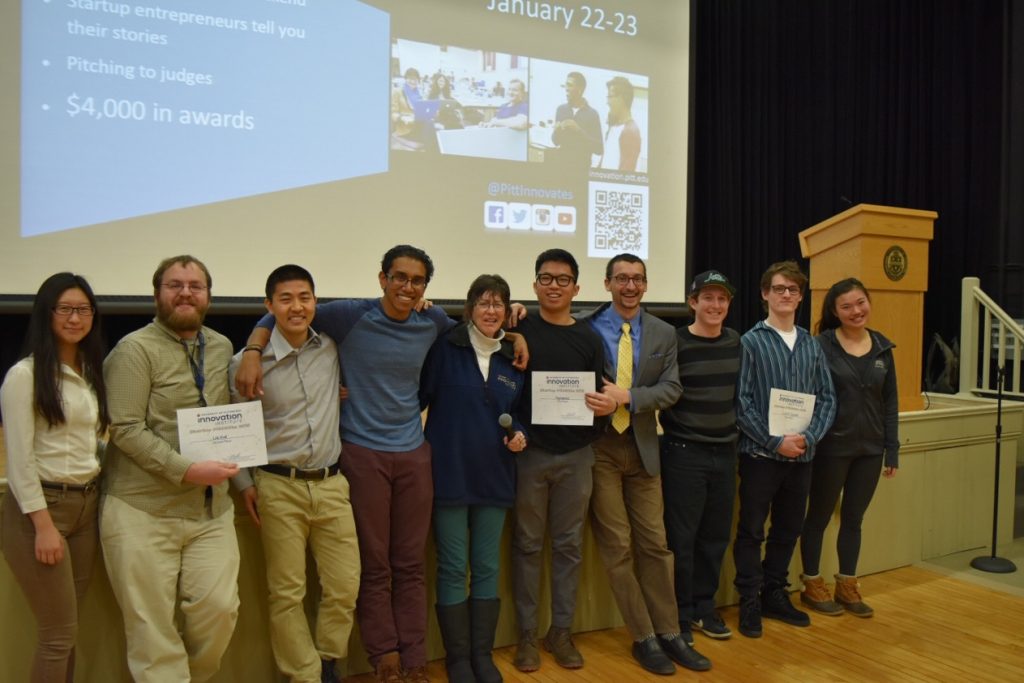 In all, nearly 30 students of all levels spanning the university spent Friday night and most of the day Saturday forming themselves into seven teams. Working with mentors from the Innovation Institute, they worked over 24 hours to hone their value propositions and determine who the customers are that would pay for their product or service.

At the end of the PittBlitz, each team rehearsed and delivered a five-minute pitch to a panel that included people from local business accelerators Idea Foundry and Alphalab Gear and tech consulting firm C-leveled.

Williamson, who is a veteran of the Startup PittBlitz, said he registered without an idea of his own just to be part of the atmosphere. Winding up on the top placing team was a bonus.

“(PittBlitz) is just a place to meet great people who are passionate about entrepreneurship. I like that the Innovation Institute treats you seriously as a student entrepreneur,” he said. “The judges treat you the same way they would treat any company applying to be in their accelerators. They pick you apart, which only helps you think more deeply about your idea.”

Luong, for his part, had been thinking about aquaponics, which incorporates aquaculture and agriculture, recycling fish waste into nutrients for growing plants.

“I’ve been sitting on the idea for over a year. It’s just finding a way to make a sustainable business plan around it,” he said. “Social entreprenurship is what interests me. If I’m building something that helps people and the world, I will be happy.”

Luong is a resident of the Innovation and Entrepreneurship Living Learning Community, a freshman community comprised of like-minded students from Pitt Business, Arts and Sciences and Engineering who participate in programs and events throughout the academic year related to innovation.

At the other end of the experience spectrum was Ray Funahashi, a medical school student who devised the idea for LabKind, a platform for eliminating waste and enhancing collaboration in laboratories, which won the second place prize of $1,000.

He was joined by Sophia Tan and Drew Brumbaugh from the College of Business Administration and Arun Balaraman from the school of engineering.

Tan said Funihashi’s ideas seemed to her the most innovative.

“I now want to help develop it even more in the Big Idea Competition,” she said.

Placing third and winning $500 was Local Scene, a service mimicking Uber and Airbnb. Students on this team included Connor Lamb from CBA, Dan Deutsch from Arts & Sciences and Rena Jiang from the School of Pharmacy.

The next step for most of the PitttBlitz participants is to enter the Randall Family Big Idea Competition, the region’s largest student startup competition, awarding $100,000 in cash prizes. Applications are due February 7.

Babs Carryer, Director of Education and Outreach at the Innovation Institute, said she was pleased with the diversity of students in the latest PittBlitz, which is conducted once per semester.

“Through events like Startup PittBlitz the Innovation Institute is giving students on on-ramp to entrepreneurship as a career option,” she said. “I look forward to seeing these teams take their ideas to the next level in Randall, where they will continue to have access to the people and resources of the Innovation Institute to refine and grow their companies,” she said.

Participants in the Big Idea competition will be encouraged to enter the next cohort of the Blast Furnace, the Innovation Institute’s student business accelerator, which begins in April.

Greg Coticchia, Blast Furnace director and Innovation Institute Entrepreneur-in-Residence, who helped coach some of the PittBlitz teams, said he told the teams not chosen in the top three to not give up on their ideas after working on them for just one day.

“A different set of judges might have viewed these ideas differently,” he said. “Some of them may need to pivot on their idea to focus on a different target customer, or work a bit to redefine what their value proposition is and how they can better meet their target customers’ needs,” he said.