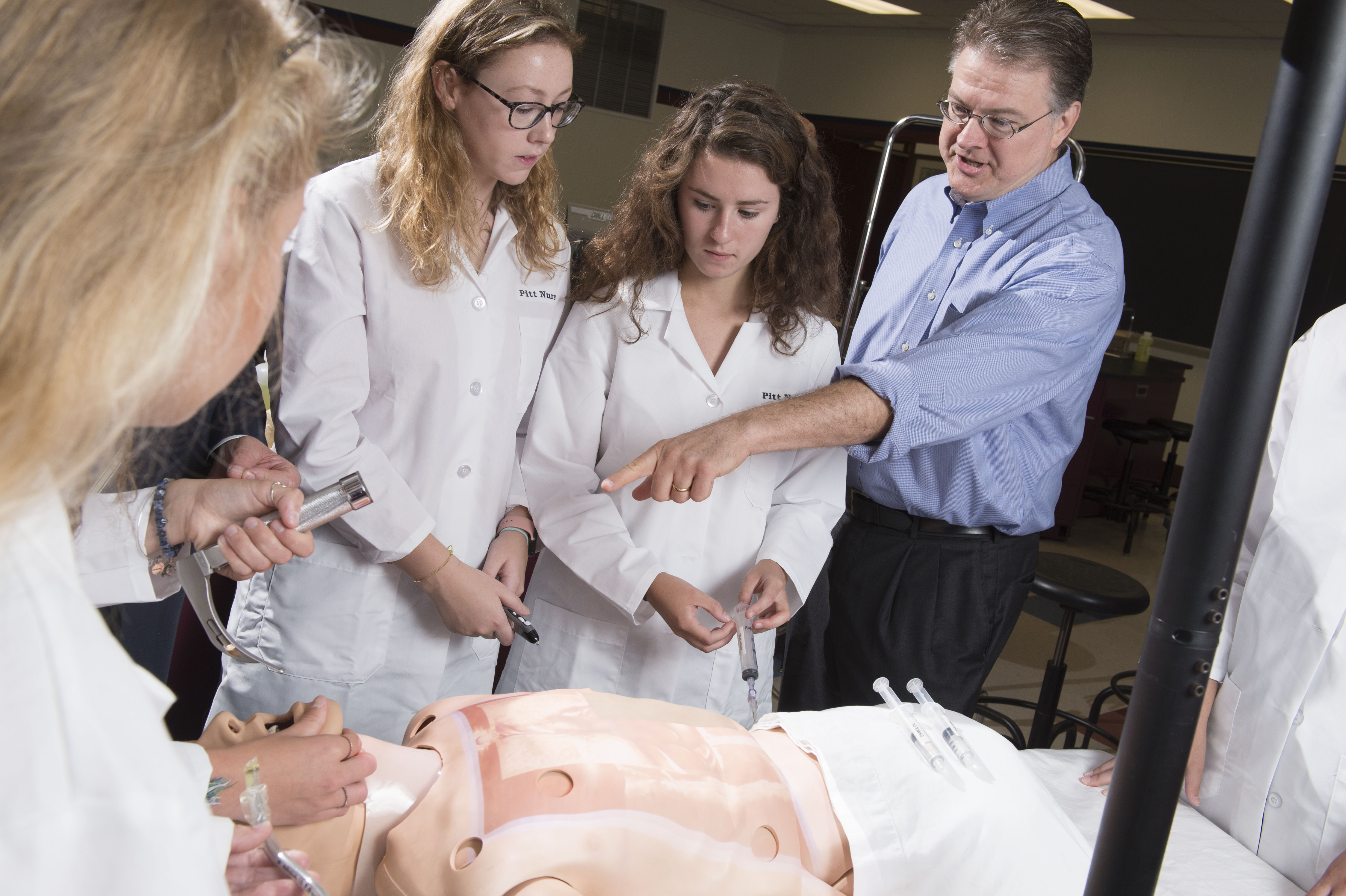 A group of Pitt freshman nursing students huddles around a mannequin with an overhead projector that beams down a display of the “patient’s” beating heart and breathing lungs. At the instructor’s direction, one of the students injects the patient with a dose of epinephrine, commonly known as adrenaline.

The patient’s heart rate visibly and audibly begins to increase.

Later,  a dose of Propofol, a drug used to induce general anesthesia, is administered, causing the patient to cry out in pain.  In this instance, the medication had been administered too rapidly.

Augmented reality holds the potential to provide autonomous, customized learning in Pitt classrooms. For a collaborative team of investigators from the Swanson School of Engineering and the School of Nursing, their new system for training nurse anesthetists has been spun out of the University as a new company.

Doug Nelson helped develop the technical capabilities of the BodyExplorer platform as the focus of his bioengineering doctoral dissertation. Along the way he was bitten by the entrepreneurial bug and today is the CEO of Lumis Corp., which aims to make advanced, simulation-based healthcare education more effective, affordable and available to more students and healthcare trainees.

“Our goal is to continue to increase patient safety and quality of care by making advanced, simulation-based training for clinicians more accessible and easier to use,” Nelson said.

BodyExplorer addresses limitations of current simulators, specifically the inability to display internal anatomy and visualize the internal consequences of external actions, prove automated feedback to trainees, and enable 24/7, on-demand self-learning. BodyExplorer addresses these confines by projecting augmented reality images directly onto the surface of a training mannequin and giving students immediate audio and visual cues directly corresponding to their treatment choices. The system simultaneously provides real-time coaching and feedback on their performance. 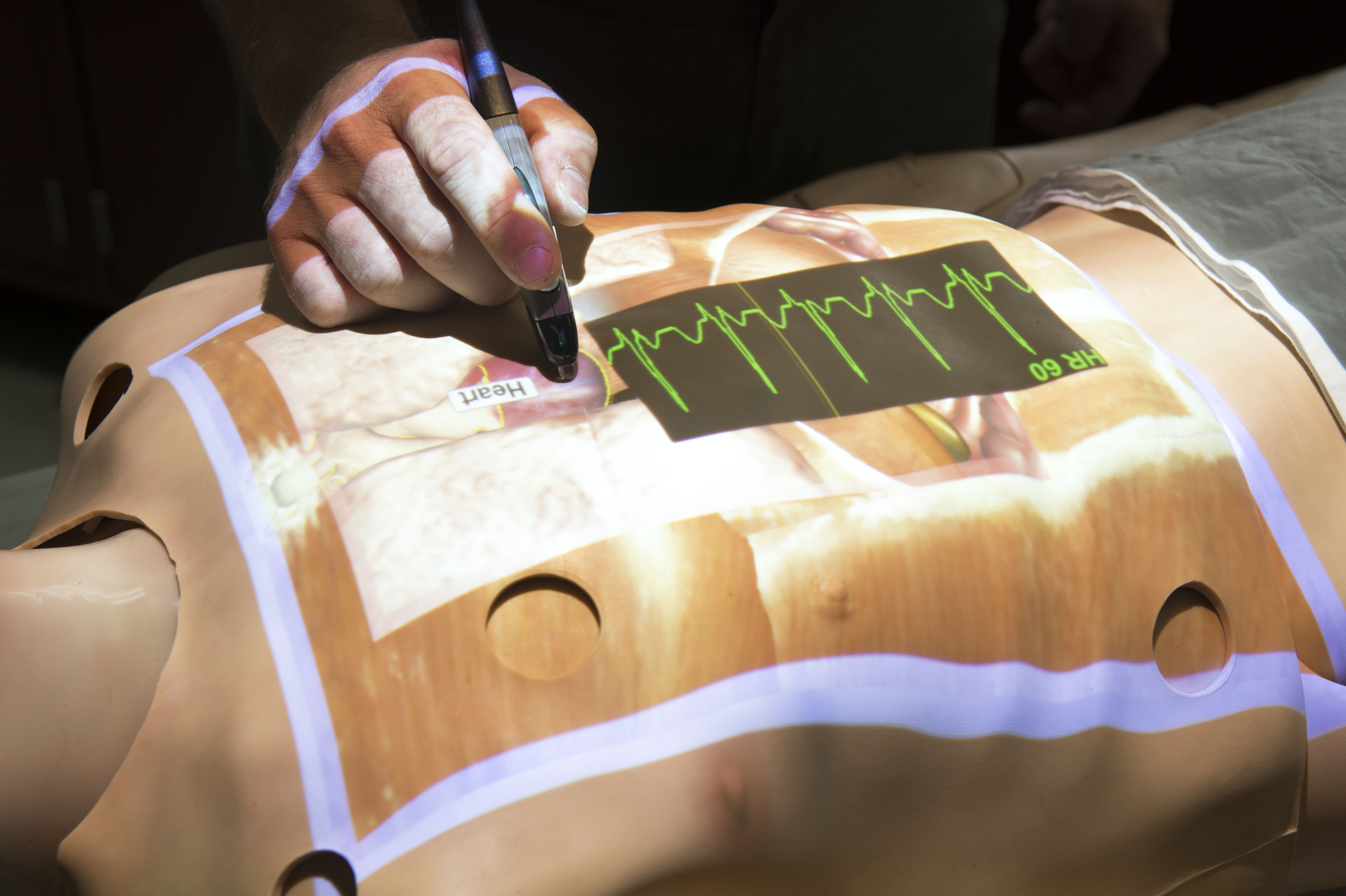 The idea for BodyExplorer was conceived by principal inventor, Dr. Joseph Samosky, in 2008. The current system is the result of a collaboration between engineers and clinical educators. Samosky, assistant professor in the Swanson School of Engineering’s Bioengineering Department and director of the Simulation and Medical Technology R&D Center, created BodyExplorer through a series of student design projects focusing on specific educational needs identified by subject matter experts at Pitt’s School of Medicine and School of Nursing.

“We recognized the commercial potential as our initial research publications came out in 2012 and received quite the buzz when we presented at various research conferences,” Nelson said. “The common thing we kept hearing when we’d demonstrate BodyExplorer was, ‘This is so cool, how much does it cost, and when can we buy it?’”

Early enthusiasm from potential customers motivated the team to apply for funding and mentoring from the Coulter Translational Partners II program and educational programming on entrepreneurship through the Innovation Institute.

“Our design approach has always been fundamentally user-centric,” Samosky said. “The Coulter program provided resources to enable us to explore the practical aspects of making this technology available to the ‘real world’ of clinical healthcare education.”

Over five years, Coulter has funded 30 projects, eight of which have developed into spinouts and three others that have been licensed to existing entities, with more in the pipeline. The $2.6 million invested by Coulter has produced a downstream investment of $11.3 million in private investment and $13.4 million in follow on translational grants.

“BodyExplorer was funded by the Coulter Program in 2014, after competing with over 30 other applicants for translational research funds,” said Coulter Director Max Fedor. “Coulter connects its project teams with experienced business leaders from the life sciences business community.”

Dr. John O’Donnell, chair of the Nursing School’s Department of Nurse Anesthesia and director of research for the Peter M. Winter Institute for Simulation, Education and Research WISER, joined the project as co-investigator at the time of the Coulter funding, and continues on the project as the primary clinical and educational methods consultant.

Also in conjunction with Coulter, the team participated in the Innovation Institute’s Pitt Ventures First Gear program, which pairs the investigators with an experienced business mentor who guides them through a rigorous customer discovery process to determine how their idea best solves a problem in the market. Each First Gear team receives $3,000 from the NSF I-Corps program to defer costs of pre-commercialization activities.

Phil Brooks, Innovation Institute Entrepreneur in Residence who mentored the BodyExplorer team, encouraged them to use their I-Corps funding to travel outside Western Pennsylvania to meet with nursing educators. Prior to this exercise, the team assumed most nursing schools had sufficient inventories of medical simulators that could be retrofitted with their technology. But it turned out not to be the case, which required them to re-evaluate their path to market.

Nelson said BodyExplorer is the first system of its kind to be fully self-contained, so that it may be used by trainees without the need for support staff. Most simulation systems require medical and non-medical personnel to operate and monitor the complex technology. As an automated system at a relatively low price point, Nelson envisions health systems acquiring multiple units for their students to practice frequently and on their own schedules, leading to better trained clinicians.

Amanda Roll, Master of Science in Nursing and Certified Registered Nurse Anesthetist (CRNA), was chosen out of a group of volunteers to develop first-round usability testing while a graduate student in Pitt’s Nurse Anesthesia program.

“We tested the testers so to speak,” Roll said. “We developed a step-wise set of directions for the next round of usability testing with the system, helped with recruitment within the university and hospital system, and set up standard observer roles and debriefing tools for the testing sessions. The most exciting part was watching the participants explore the system, see the enthusiasm as they described multiple uses for the system, and then head back to the lab to help develop these new modules.”

Roll, currently a Nurse Anesthetist at Penn State Hershey Medical Center in Hershey, PA said, “There is no other system like BodyExplorer. The benefits that it will provide to students, clinicians, and to their respective departments/institutions are limitless.”

BodyExplorer has been recognized for its novel automated drug simulation recognition technology and was awarded first place for technology innovation at the International Meeting on Simulation in Healthcare, the world’s largest healthcare simulation conference. In January 2017, at the same conference, the newest BodyExplorer prototype was awarded “Best in Show” at the conference’s Serious Games and Virtual Environments Showcase.

Nelson said he had no plans on becoming an entrepreneur when he began his Ph.D program, but through his experience with the University innovation and entrepreneurship ecosystem, he said he doesn’t plan to look back as he seeks to make Lumis Corp. a successful Pittsburgh startup. 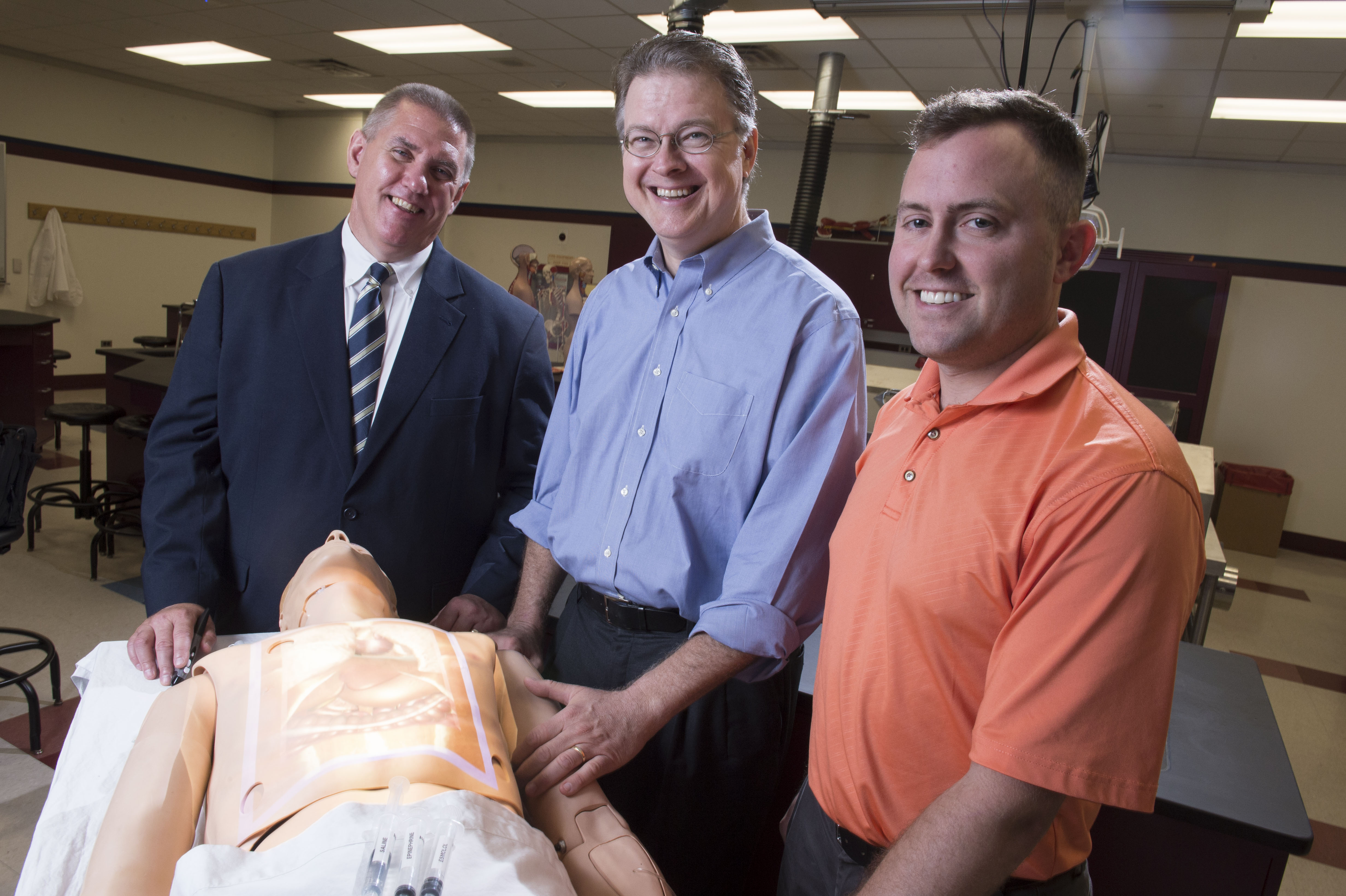