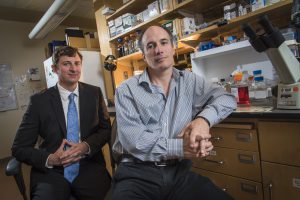 Stephen Thorne came to a crossroads as a Stanford University postdoc eight years ago when he made a pivotal decision to trade the consistently sunny Silicon Valley for the seasonal cycles of Western Pennsylvania.

Thorne’s work with genetically engineered viruses as a potential treatment for cancer arrived at a point where felt he needed to find a new home for his research at the University of Pittsburgh, which he said shared his philosophy of encouraging the body’s innate defense mechanisms to fight disease, and a track record dating back to Dr. Jonas Salk of pioneering work in vaccines and immunology.

A Ph.D. In molecular biology, Thorne also wanted to be in an environment where he could interact daily with colleagues who are leading experts in oncology and immunology to help fill in gaps in his own training.

His intuition has paid off.  Over the course of his time at Pitt, Thorne’s lab at the University of Pittsburgh Cancer Institute has engineered “Swiss Army knife” viruses with one “attachment” that can evade the body’s immune response, while another cancels a cancer tumor’s ability to do the same, and yet another that invites the body’s microbe-fighting T-cells to hone in on both tumor cells infected by the viruses, as well as surrounding cancer cells.

Following on successful preclinical studies, and now with a partnership with one of the world’s largest pharmaceutical companies, Thorne is once again making a decisive move. He is taking a leave from his faculty position at Pitt to join the startup that has licensed his technology from the University, Western Oncolytics Ltd., as chief scientific officer. 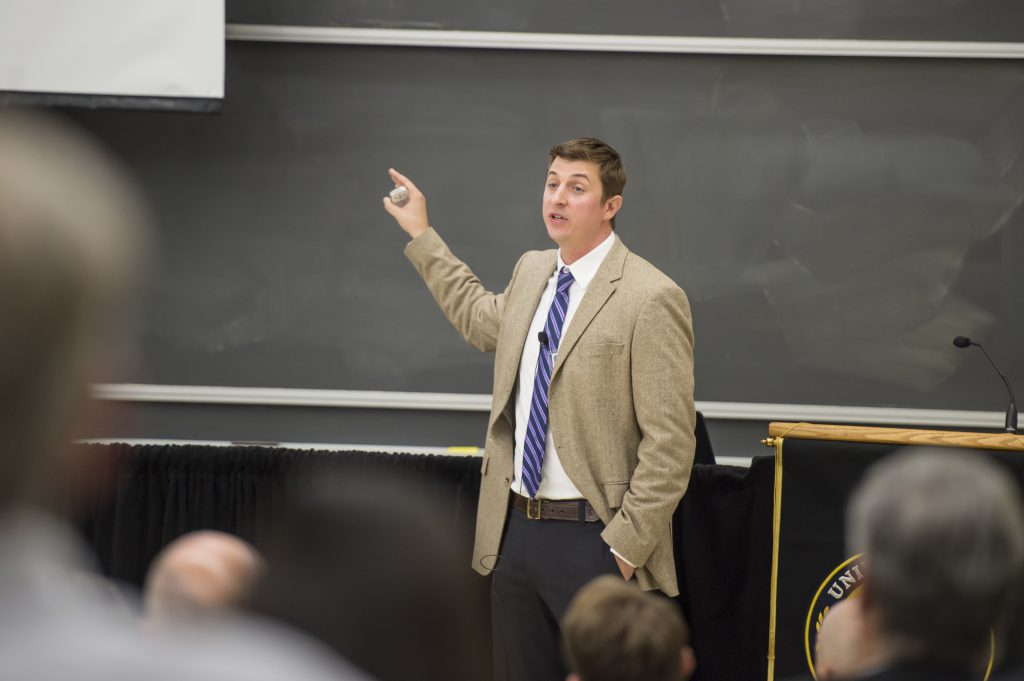 In this role he intends to see his work through to point where his discoveries are responsible for extending the lives of cancer patients.

“We would have never ended up with the virus that we did had I not come to Pittsburgh,” he said. “It was the right environment for what I had set out to do. We are very hopeful, but there is still a lot of work to do and I am grateful for the opportunity to carry this work forward outside the University.”

Moving from the lab to the Market

Since disclosing his discovery to the University’s Innovation Institute in 2013, events have proceeded quickly for Thorne.

His disclosure was assigned to Innovation Institute licensing manager Maria Vanegas, who recommended additional development of the virus prior to filing a provisional patent application.

“The field of oncolytics is becoming a crowded space, so we wanted to make sure our application was as strong as possible prior to filing,” Vanegas said.

Thorne said he benefited greatly from the recommendation and the additional lab work that resulted led to the creation of a new and improved virus candidate.

Around the time the patent application was filed, Thorne received a call from biotech entrepreneur Kurt Rote, who  was working on a startup in Cleveland and scouting for new opportunities.

“I had surveyed the field enough to know after that first chat with Dr. Thorne that this technology has the potential to be a game changer,” he said.

Western Oncolytics was one of the first to take advantage of the Innovation Institute’s new “Express License” templates designed to expedite the licensing process and reduce the initial expense by requiring the licensee to pay only patent costs at the initiation of the license.

“It’s great to have a university partner who is not afraid to say, ‘Yes,’” Rote said.

Thorne also credited the recent changes to University policy around leaves of absence for faculty who want to be entrepreneurs.

“What I am doing I probably would not be able to do at Pitt just a few years ago,” he said.

Soon after the license was executed, pharmaceutical giant Pfizer Inc. approached the company with an offer to co-develop Western Oncolytics’ initial viral therapy candidate, dubbed WO-12.

With the Pfizer partnership in place, Western Oncolytics is negotiating for new office and lab space near the RIDC complex in O’Hara Township.

Thorne may have partially been infected with the entrepreneurship bug by his wife, Rebecca Critchley-Thorne, vice president of research and development for Cernostics, a cancer diagnostics startup. If all goes well with the planned new headquarters, the Thornes will be able to trade stories about the travails of startups over lunch, as Cernostics is located nearby.

Rote and Thorne are currently advertising to fill five new positions as Western Oncolytics prepares for the next phase of its development: shepherding WO-12 through Phase I & II clinical trials to demonstrate safety and efficacy.

This is the first area where the Pfizer partnership will be of immense value, they said.

“Having Pfizer at our side will be of great value for clinical trial management, R&D support and eventually for marketing, sales and distribution,” Rote said.

Thorne said that oncolytic virus therapy in most instances will be most effective in combination with other immunotherapies that work to promote the body’s natural defense mechanisms. This is another area where they will work closely with Pfizer, which has made a significant commitment to immuno-oncology and has several drugs already on the market, and is ramping up its strategy to enter development partnerships with university and other research centers and biotech startups.

To date, only one oncolytic virus therapy has been approved by the FDA. Earlier in 2016 Amgen, another major pharma company, began marketing Imlygic to treat melanoma. According to published reports, it paid $425 million up front, plus $575 million in potential milestone payments to acquire Imlygic’s inventor, Biovex.

Following the Phase I trials, Pfizer has an exclusive option to acquire WO-12 from Western Oncolytics.

“Our goal is to combine WO-12 with our portfolio of promising investigational immunotherapies to explore how these novel combinations could help further enhance the body’s immune response in fighting cancer cells,” said James Merson, Ph.D., Chief Scientific Officer, Vaccine Immunotherapeutics at Pfizer in a news release last month. “We believe that the real advances in immuno-oncology will come from novel combinations, and cancer fighting viruses and vaccines could play a key role in helping transform cancer treatment and potentially enable us to treat more patients.”

Thorne and Rote are happy to be a close follower behind Amgen’s Imlygic, which should help set standards for oncolytic clinical review and adoption by oncologists, and thereby provide a clearer path to market for WO-12 should it receive future FDA approval.

“We are standing at the threshold of a biotech revolution that has the potential to change the way diseases like cancer are treated,” said Rote.

For information on more information on emerging licensing opportunities in the immuno-oncology therapeutics domain at Pitt, contact Maria Vanegas or Andrew Remes.