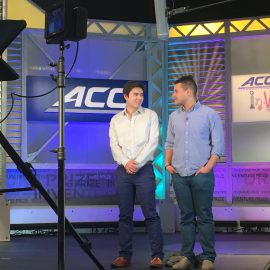 The ACC InVenture Prize is an innovation competition in which teams of undergraduates representing each ACC university pitch their inventions or businesses before a live audience and a panel of judges. Teams will compete for $30,000 in prizes and a chance to be the next ACCIP winner. Fifteen university teams will pitch during the preliminary round occurring in April, after which five teams will be chosen to advance to the final round broadcast live on television and streamed online.

Four Growers was a team that represented the University of Pittsburgh in the most recent ACC InVenture Prize. They placed second in the competition, winning $10,000 for their greenhouse robotics technology.

Priority goes to teams who have participated in the Randall Big Idea Competition or other comparable competitions. This event is only open to undergraduate students. If you would like to participate please attend the Big Idea launch party, which occurs each fall semester. Invitations will be sent out for selected teams.