$100,000 in prize money awarded to 16 student teams from across the University

Thirty-six finalist teams of University of Pittsburgh student entrepreneurs with ideas ranging from wristbands that monitor blood alcohol content to an app to improve shopping for local produce, to a new system for detecting cancer in the blood – and everything in between – had their innovations put to the test in the 8th annual Randall Family Big Idea Competition. 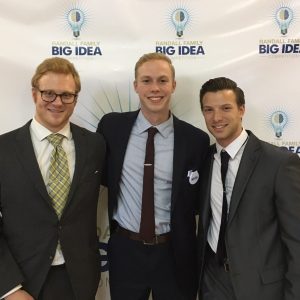 The winner of the grand prize of $25,000, was POD, which is developing portable oxygen devices for people suffering from chronic obstructive pulmonary disease. The winning team, comprised of students Alec Kaija and Blake Dube from the Swanson School of Engineering and Mark Spitz of the School of Education, will travel to Georgia Tech University for the inaugural ACC InVenture Prize competition, where they will compete against teams from the other 14 Atlantic Coast Conference universities for the opportunity win another $15,000 on April 5 and 6.

“Our product fundamentally changes the way we store oxygen. We use porous materials to concentrate a 1 hour supply of oxygen in a standard aluminum soda can,” Dube said.

POD began as a summer research in the chemical engineering lab of assistant professor Christopher Wilmer, where Kaija is a PhD student. Dube joined the project after taking a product design course where Kaija was a teaching assistant.

Dube has known his roomate, Spitz, since attending high school together in York, PA. Spitz helped direct the team towards developing a solution for those suffering from COPD from his experience working as an exercise science student in the University Center for Emphysema and COPD.

The POD team has filed a provisional patent on their idea and Dube will be working on a prototype in the fall studying with chemical engineering professor, Dr. Eric Beckman, who himself holds 37 patents and was a co-founder of Cohera Medical Inc.

While they continue working on the product, the trio plans to enter the Blast Furnace student business accelerator at the Innovation Institute, where they will receive hands on education in entrepreneurship and work one-on-one with an experienced mentor.

They also plan to apply to upcoming competitions, including the Wells Student Healthcare Competition, part of the Pitt Ventures Student Challenge, in addition to the Pitt Innovation Challenge.

If they run the table, they would match the mark of last year’s Big Idea winner, Interphase Materials.

“We’re going to take it as far as we can,” said Dube. “Big Idea has been a great platform for us and through the competition we already have had people express interest in acquiring or licensing the technology.”

The competition began in February with 253 students comprising 75 cross-disciplinary teams. An initial elimination round resulted in 55 semifinal teams, who all received mentorship from Innovation Institute staff, or volunteers from Pittsburgh’s innovation and entrepreneurship community. The final 36 teams all produced a two-minute pitch video.

“The quality of the student teams in Big Idea continues to improve from year to year,” said Jeffrey McDaniel, executive in residence at Innovation Works, a state-funded early stage technology investment organization, who has volunteered to judge the competition the past three years. “The level of sophistication of the pitches reflects the enhanced support system that the Innovation Institute is providing for student entrepreneurs. It was particularly encouraging to see freshmen and sophomores pitching with such conviction and confidence.”

Giving the keynote address at the awards showcase was Pitt alumna Jess Edelstein (A&S 11), who last year received an investment on the ABC reality show Shark Tank. She related the dogged determination she and her partner demonstrated to go from packing their all-natural deodorant in a rented kitchen in batches of 30 jars at a time, to becoming the third fastest company in the show’s history to hit $1 million in sales.

The Big Idea competition is supported by Pitt alumnus and trustee Robert Randall and his family. Randall, who founded Three Rivers Aluminum Company (TRACO), told students that entrepreneurship “must be a key part of the academic curriculum at any university,” and urged students to take the lead in growing Pitt’s entrepreneurial culture.

“I’m particularly delighted that Pitt has embraced entrepreneurship. You are a part of metamorphic changes that will yield incredible returns. The more you push it, the more you drive it, the University will have to respond, and it is responding in a very positive way,” he said.

The rest of the prize winners are: 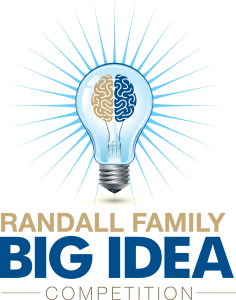