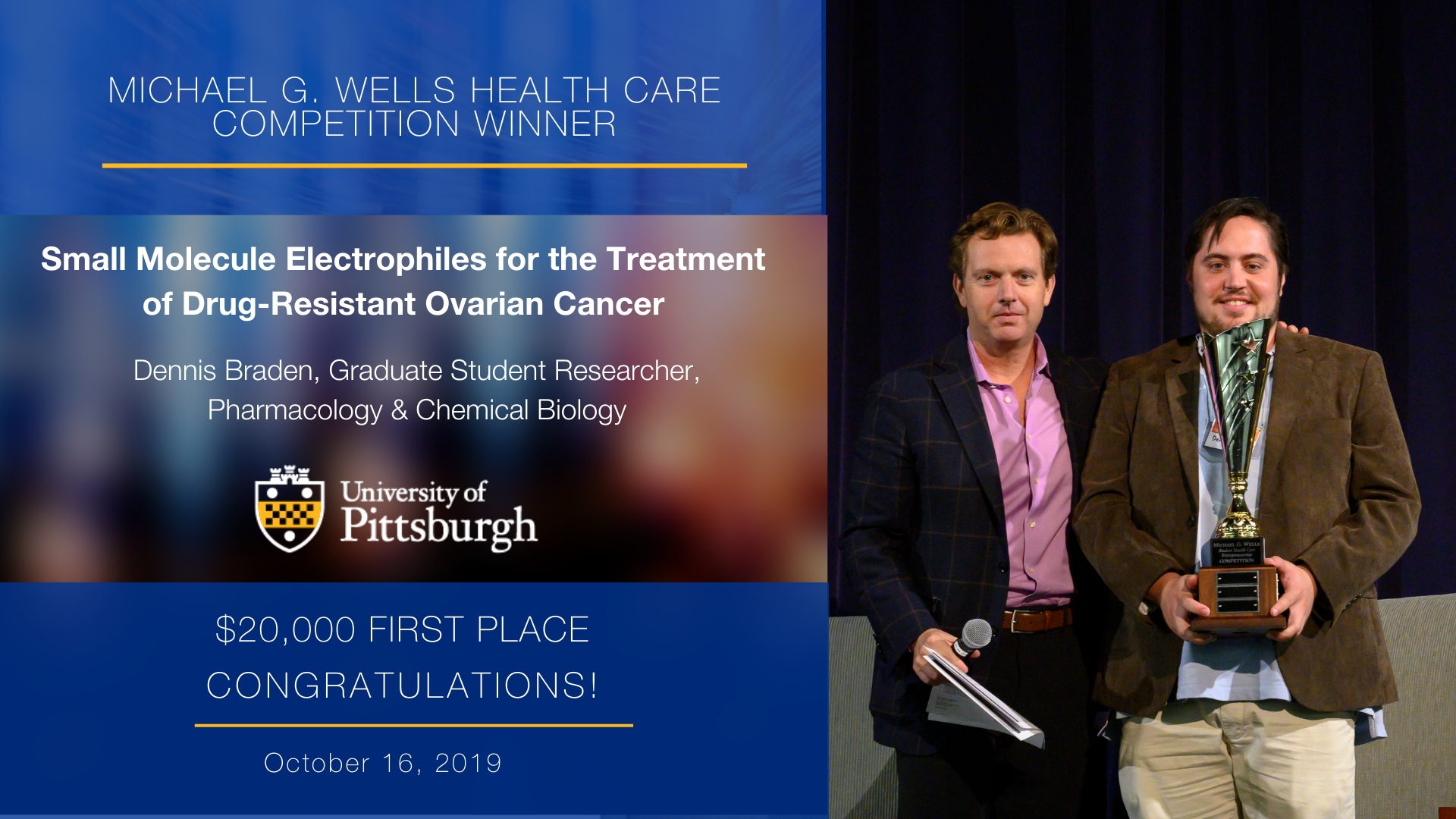 The eponymous founder of the Michael G. Wells Healthcare Competition, Mr. Wells, names the winners of this year’s 2019 competition. A total of $35,000 was given to deserving Pitt technologies with the potential to impact diseases like ovarian cancer and conditions such as aortic aneurysms and postoperative complications.

Reflecting on the student pitch competition that bears his name, Pitt trustee Michael Wells said he was in awe of the “hit rate” of around 50 percent of participants in the competition who have gone on to form startup companies.

As he prepared to present the $35,000 in 2019 awards for the Michael Wells Student Healthcare Competition just prior to the annual Pitt Innovation Showcase on October 16, he said the three teams that did not receive a prize should not be discouraged.

As if to prove that point, just prior to the awards, a panel discussion of former Wells competition participants featured Eric Sinagra, CEO of pathVu, a Pitt spinout that competed in but did not win a Wells prize five years ago. Nevertheless, pathVu is now a revenue generating company with its technology for collecting sidewalk pedestrian accessibility data to assist wheelchair users. 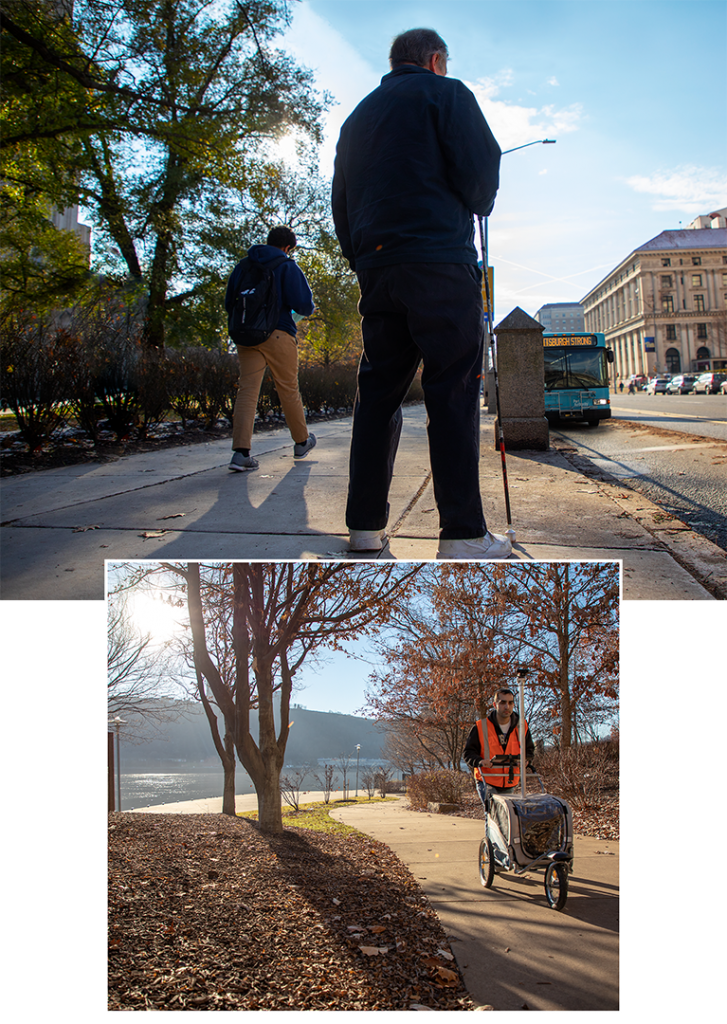 Eric Sinagra, CEO of pathVu, spoke at the Michael G. Wells Entrepreneurial Lecture. pathVu is an app that maps real-time pedestrian sidewalk navigation to help accessibility and walkability of routes.

Wells presented the $20,000 top prize in the 2019 competition to a team that is developing a small-molecule DNA repair inhibitor for the treatment of ovarian cancer. Leading the team is Dennis Braden, a graduate student in the Department of Pharmacology and Chemical Biology.

Braden said the funding will help accelerate the movement of the compound into clinical trials by 2021.

Winning the $10,000 second place prize was a team led by postdoctoral researcher Timothy Chung, who works in the lab of David Vorp, associate dean for research at the Swanson School of Engineering where he is a professor of bioengineering.

They have developed a medical device to treat traumatic arterial injuries, including aortic aneurysms.

Taking home the $5,000 third place was a team led by Pitt School of Medicine resident Michael Schnetz. They are building a software app for hospital systems and surgical centers to reduce postoperative complications.

Laurie Kuzneski said that her husband’s father and uncles escaped being potato farmers by attending Pitt and playing football. 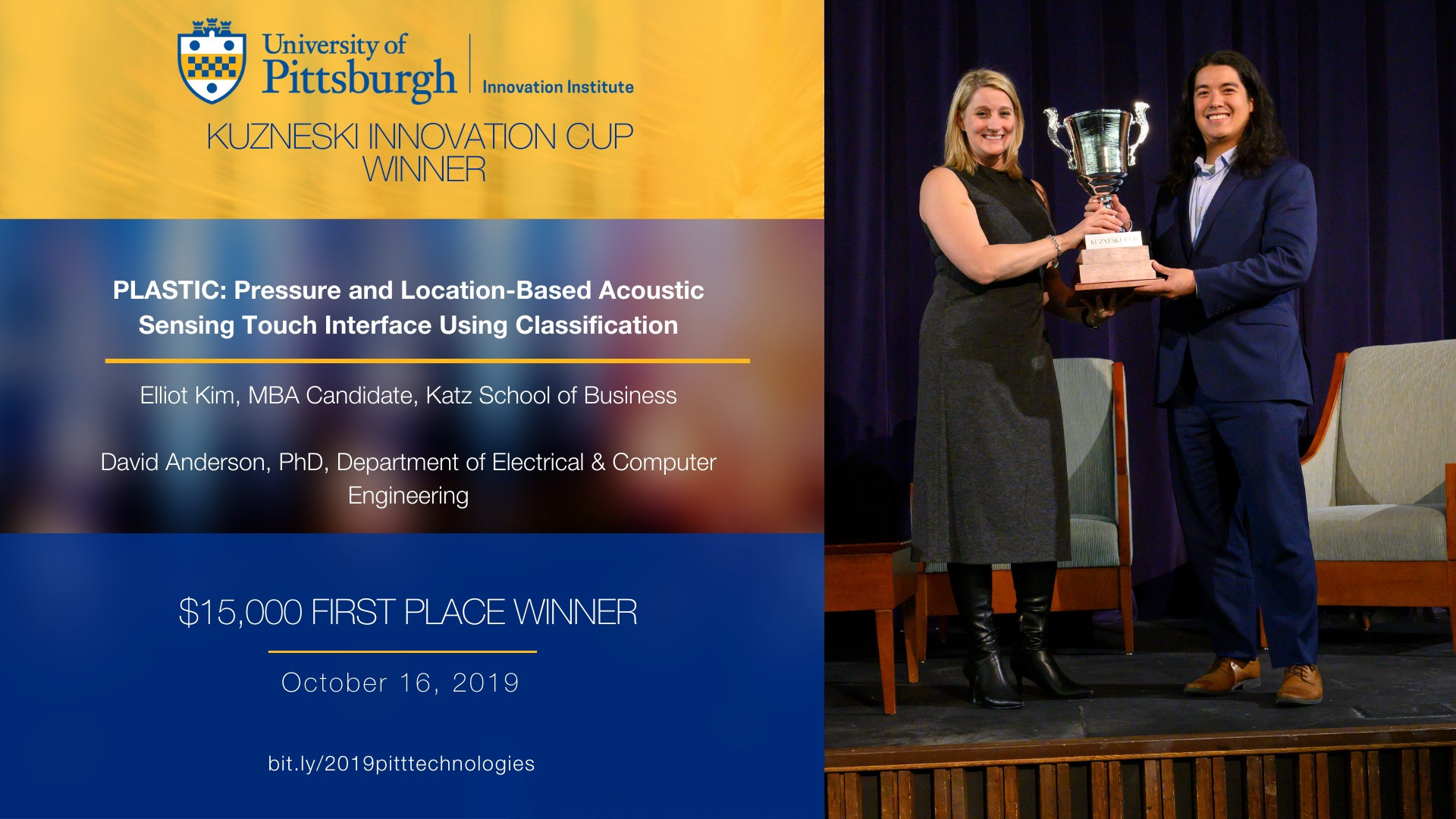 “They all became entrepreneurs after graduating college. The next generation of Kuzneskis realized you only take a few less blows to the head to be an entrepreneur than you do as a football player,” she joked before announcing the winners.

First place in the Kuzneski competition, with a prize of $15,000, was awarded to the team of Elliot Kim, an MBA student at the Katz School of Business and Zhengze Xu, working with David Anderson, assistant professor in the Department of Electrical and Computer Engineering at the Swanson School of Engineering, who have created a technology that can turn any hard surface into a touchscreen at a much lower price than the touchscreens currently on the market.

Taking second place and $7,500 was Eva Roy, a School of Medicine student, who is developing a rating and review app for hospital systems that gathers patient experience data in real time to allow hospitals to adjust care to improve patient experience and outcomes.

Third place and $5,000 went to Travis Fernald and Jacob Jakielaszek, students in the School of Dental Medicine for their “Bagpipe” resuscitation bag, which is a more efficient manual resuscitation bag allowing one person to do the work of two when administering CPR.

During the panel discussion, moderated by Rich Lunak, President CEO of Innovation Works, the state-funded early stage technology investment fund that operates the AlphaLab and AlphaLab Gear accelerator programs, the three Pitt startups detailed their journey out of the University and the support they have received.

Lorenzo Soletti, a former Innovation Institute entrepreneur in residence who licensed technology for repairing peripheral nerve damage from the lab of Bryan Brown, assistant professor of bioengineering, to form the company Renerva, said that in two years of “academic incubation” at Pitt, the project took advantage of every resource available to raise over $300,000 in funding.

“Our experience ranged from fantastic to outstanding,” he said.

Soletti said Renevera since leaving the university has raised $1.1 million in investment capital on top of $3 million in grants from the Department of Defense, National Institutes of Health and the National Science Foundation as it prepares to raise a round of venture capital funding next year to begin clinical trials in Europe in March.

“Despite the magnitude of money required to bring an implantable technology market, we’re as incredibly lean as we can be with seven full time people.

Eunice Yang, professor of engineering at Pitt’s Johnstown campus, is CEO of OK2StandUp, which spun out of the university this year. Her technology is a wearable artificial intelligence-driven device worn to help prevent falls due to dizziness upon standing, a problem affecting up to 60 percent of older adults.

“I have used these resources to the fullest, even after I have spun out. They just give willingly and it’s a wealth of knowledge. And as a Pitt faculty, it’s free.”

“Pitt has been wonderful. They resources available at Pitt as an innovator are tremendous,” Yang said. “You have the Innovation Institute, sciVelo, CTSI (Clinical and Translational Science Institue)…We also have the Institute for Entrepreneurial Excellence. I have used these resources to the fullest, even after I have spun out. They just give willingly and it’s a wealth of knowledge. And as a Pitt faculty, it’s free.”

Yang said she is in a pre-seed fundraising phase, having bootstrapped the initial stages with money from friends and family.

She applied for a Small Business Innovative Research (SBIR) grant through the National Institutes of Health and is expecting to receive and answer soon.