Two Pitt student companies that grew up through the university’s entrepreneurship ecosystem have been included among the nation’s best student startups by the National Council of Entrepreneurial Tech Transfer (NCET2).

“Having two of our student teams selected for the NCET2 is a tremendous honor and reflects the growing interest in entrepreneurship demonstrated by Pitt students,” said Greg Coticchia, entrepreneur in residence at the Pitt Innovation Institute and director of the Pitt Blast Furnace student startup accelerator. “The experience of Aeronics and uTranslated is illustrative of the growing network of programs and resources that provide hands-on experiential learning opportunities for our students.”

uTranslated was the inspiration of Nicole Xu, Lujing Gao, then graduate students at the Pitt Graduate School of Public and International Affairs, who had the idea for re-imagining language translation services to empower the translators and deliver reliable cost-effective service for clients.

They recruited fellow GSPIA student John Frazier to attend a Startup Blitz weekend startup-athon sponsored by the Innovation Institute. They pitched their idea at the end of the event and won the top prize. From there they entered the Blast Furnace, a nine week program for students of all levels from across the university to learn the basics of entrepreneurship and were chosen as the grand prize winner in the demo day at the end of the program.

Their Blast Furnace success led to their acceptance in the AlphaLab Gear regional business accelerator in Pittsburgh’s East Liberty neighborhood.

“It’s a tremendous honor receive this recognition as we work tirelessly to make uTranslated an international success. I think it speaks loudly that two companies will be representing the University of Pittsburgh. It’s a credit to the Blast Furnace program that the Innovation Institute has built,” said John Frazier, CEO of uTranslated. 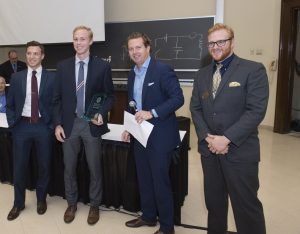 Previous to entering Blast Furnace, the trio had taken advantage of the education and mentoring offered through the Innovation Institute’s Pitt Ventures Gear Program and had won the $25,000 top prize in the 2016 Randall Family Big Idea Competition and won prizes in both the Michael G. Wells Student Healthcare Competition and Kuzneski Innovation Cup. (Applications are currently being accepted for both competitions through May 15, 2017).

“Being selected by NCET2 for this event is exciting for our company, because it gives us the opportunity to extend our network and continue to spread our idea. Having two Pittsburgh companies being awarded with this honor is indicative of the growing entrepreneurial community in Pittsburgh, which is something I have noticed and benefited from even in the last three years,” said Dube, CEO of Aeronics.

Coticchia is currently directing the fifth cohort of the Blast Furnace, comprised of nearly 30 teams, the largest group to go through the program since its inception in 2015. New this year, five teams have been selected as Blast Furnace Fellows, each receiving $10,000 to work full-time on their idea with the goal of launching a startup by the end of June.

“We are proud of the fact that Pitt students launched a record 12 startups last year, Coticchia said. “Learning the elements of entrepreneurship is beneficial to students whether they decide to start a company, or if they lead innovation projects within a larger organization,” Coticchia said.