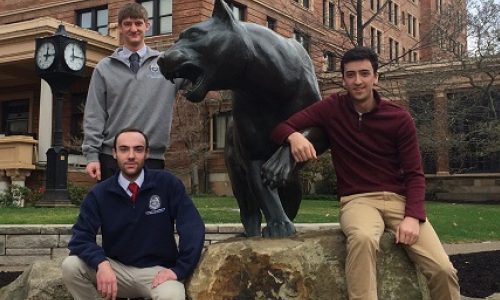 This year, the University of Pittsburgh’s selected finalists for the Atlantic Coast Conference (ACC) InVenture Prize competition will present a fully-realized prototype that began with some socially conscious web searching. Monarch Solar, comprised of team members Jay Murray, Nick Faughey, and Ben Stutz, has its origins in November 2015, when Murray’s roommate peppered Murray, a junior engineering science major, with

questions about a solar farm in India, a country with intermittent access to electricity.

Murray soon began researching the problem of how to increase electrical access in sub-Saharan Africa, where homes often rely on inefficient single-use batteries and dangerous kerosene lamps. In Mozambique, the country Monarch is targeting, only 6% of the rural population has access to electricity, according to the World Bank.

Murray, Faughey, and Stutz, a junior electrical engineer, ultimately developed an easy-to-install solar system that would light homes using renewable energy. Users buy a package with batteries, solar panels, and electronics, all connected via a central computing unit — the “aardvark”— designed by Monarch. After making a mobile-based deposit of around $30, the unit is activated remotely through a cell tower, providing enough electricity to light a home overnight and charge a cell phone. Monarch Solar also built scalability into its “add-on” model: after building credit, customers can opt to buy extra equipment and upgrade their systems, increasing their electrical capacity.

Carryer says that while engineers and other scientists are well studied in their subjects, this does not automatically translate to developing a business or evaluating a product’s potential. Customer base, pricing, industry competition, and the sustainability of an idea are some of the myriad considerations the competition asks teams to make.

“[Innovation Institute] programs are designed to educate and inculcate you in what you need to do to be successful as an innovator,” says Carryer.

Randall proved valuable for Monarch Solar, who significantly refined their vision based on the competition process.

“It did wonders for us as far as developing our customer proposition, who our customer base would be, and what the product would look like,” Murray said.

Monarch Solar placed sixth in the 2016 Randall competition, but also caught Carryer’s attention and that of judge Mike Matesic from the Pittsburgh accelerator Idea Foundry. With the organization’s support, the team was able to finish their prototype, 3-D printing it in Murray and Stutz’s apartment the following summer.

Later, when Carryer was considering which Pitt team to nominate for the next spring’s ACC InVenture Prize (to take place March 30-31, 2017) she thought of Monarch Solar. The InVenture Prize competition, hosted at Georgia Tech University, brings together teams of undergraduates from 15 Atlantic Coast Conference universities. There, they pitch inventions before a 15-judge panel and live TV audience, receiving $30,000 in prizes. The competition is partially the brainchild of Pitt Provost and Senior Vice Chancellor Patricia Beeson, who hoped to develop a competition for ACC universities that would be as celebrated as college sports.

To prepare for the InVenture Prize, Monarch Solar again participated in the Randall competition in 2017, further honing their product pitch, even though they knew they would be ineligible to win. After nearly two years of preparation, Murray and Faughey say they feel confident going into the InVenture Prize competition. If they place, they hope to use their winnings to pilot their product in Haiti, where the electrification rate is the lowest in the Western hemisphere.

Following the competition, they will be entering the Pitt Blast Furnace student accelerator, where they will further develop their idea with the guidance of a professional mentor and possibly be in a position to launch a startup by the end of the program, and apply to enter a regional accelerator, such as AlphaLab Gear, Ascender or Idea Foundry, which would provide them with additional funding and co-working space.

They also hope more of their peers will get involved in the University’s innovation and entrepreneurship ecosystem. All that’s required is a desire to solve a problem — like Murray had — to get started.

“I really do encourage other people to participate in the Innovation Institute’s student programming,” says Faughey.