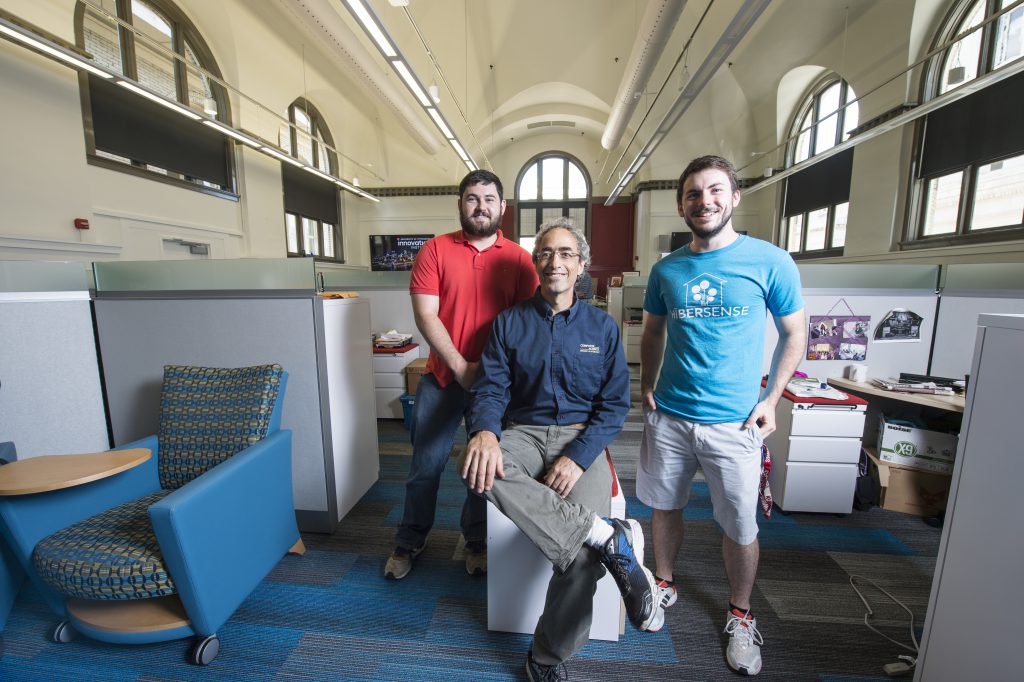 From the moment computer engineering professor Daniel Mosse pitched an idea for wirelessly networked smart sensors that control heating and cooling systems for optimized efficiency to students Jacob Kring and Brendon Quay for a course project, each of their lives took on a new trajectory.

Over the past two years they have navigated the Pitt entrepreneurship ecosystem to refine their value proposition, obtain funding to develop prototypes, and build their support network.

The trio now heads to the nation’s capital as one of 35 university startups from around the nation selected to participate in the first University Startups Demo Day at Congress. The event is sponsored by the National Council of Entrepreneurial Tech Transfer (NCET2), an association of university startup offices and is designed to emphasize to lawmakers the importance of supporting university entrepreneurship.

Kring said his favorite aspect of being in Pittsburgh’s startup community is the willingness of its members to lend a hand to a fellow entrepreneur.

“You never feel alone,” he said.

Soon after developing their concept, Kring and Quay entered it in the 2015 Randall Family Big Idea Competition, the region’s largest student startup competition. They impressed the judges and finished third.

From there they entered the first cohort of the Blast Furnace student startup accelerator established at the Innovation Institute by entrepreneur-in-residence Greg Coticchia.

Quay said the Blast Furnace experience forced them to not to focus so much on their technology, but rather on what potential customers needed their product for. This forced the engineers out of their comfort zone.

From Big Idea they entered the first cohort of the Pitt Blast Furnace student accelerator, where they focused on turning their idea into an actual business.

“The Blast Furnace taught us how to talk to people about their needs,” Quay said. “We learned that there is a big difference between having a neat idea around a technology and having an actual product that delivers value to consumers that they are willing to pay for.”

HiberSense was selected as the top presenter at the first Blast Furnace Demo Day, catching the eye of Illana Diamond, director of the AlphaLab Gear accelerator, who invited them to apply.

“HiberSense is an example of the exciting startups being created at Pitt and supported through programs like Blast Furnace at the Pitt Innovation Institute,” said Coticchia, who nominated HiberSense for the University Startups Demo Day at Congress.

Coticchia continued, “In our first year of Blast Furnace we have helped 40 student teams create companies, a third of which have gone on to be accepted into highly competitive regional business accelerators.”

HiberSense is developing a distributed, self-learning thermostat system that collects temperature, motion, light, humidity, and sound data in each room, runs machine learning algorithms to decide when to open/close our wireless motorized registers and turn on/off HVAC equipment to maximize savings and comfort.

Partnering With the City of Pittsburgh

Earlier this year, they were one of the first three startups chosen to participate in PGH Lab, an initiative of the City of Pittsburgh to collaborate with startup companies to explore ways to use technology to make the city more efficient and sustainable.

HiberSense is in the midst of a three-month project to install 30 sensors and wireless vents on the 10th floor of a Downtown office building on Ross Street. The Pgh Lab project marks their foray into the office building space.

“We’re getting some useful data,” Kring said, estimating that the HiberSense system will cut energy consumption by 16 percent in the pilot.

Mosse said the development of the prototypes of the HiberSense systems has proceeded rapidly over the past year, becoming “much better and much smaller.” Meantime, the trio is also keeping a close eye on the rest of the market.

“The competitive landscape is moving fast,” Mosse said. “We are aware we have to move faster. Some other startups have more funding; we think we have a better idea that is going to make the difference.”

For Kring and Quay, pitching their business has become second hat. They previous finished in the top of a Department of Energy competition, earning them $25,000 worth of in-kind software development. They also pitched at the national Hardware Cup in Detroit, where they were selected as the audience award winner.

“Being an engineer lends itself naturally to being an entrepreneur,” Kring said. “I’m grateful that the culture of entrepreneurship at Pitt has given us the tools to succeed in turning our idea into a company.”