Dr. Maria Escolar stands with husband & collaborator, Dr. Paul Szabolcs, in front of UPMC Children’s Hospital; they work together on a rare neurodegenerative disease, Krabbe, which has a fatal diagnosis in young children.

Passion and compassion are two sides of the same coin for Maria Escolar when it comes to her life’s work centered on rare, but exceptionally cruel, pediatric genetic neurodegenerative diseases.

If a woman and a man are unwitting carriers of a particular genetic mutation, there is a one in four chance that their children will inherit two copies – one from the father and one from the mother – that will result in the child developing Krabbe Disease.  Krabbe (pronounced “crab-ay”) occurs with a frequency of somewhere between one in 100,000, to one in 350,000 births.

Unless diagnosed quickly, in many instances in the first few weeks or months of life, the odds of living through childhood with Krabbe are almost zero. It’s the disease that former Buffalo Bills quarterback and Western Pennsylvania native Jim Kelly’s son, Hunter, suffered from before succumbing at age 8 in 2005.

Tucked inside the bowels of Children’s Hospital of Pittsburgh is a small clinic where parents of children suffering from Krabbe come from all over the country and all over the world to consult with Escolar, who over the past 20 years has become the foremost global expert on the disease. 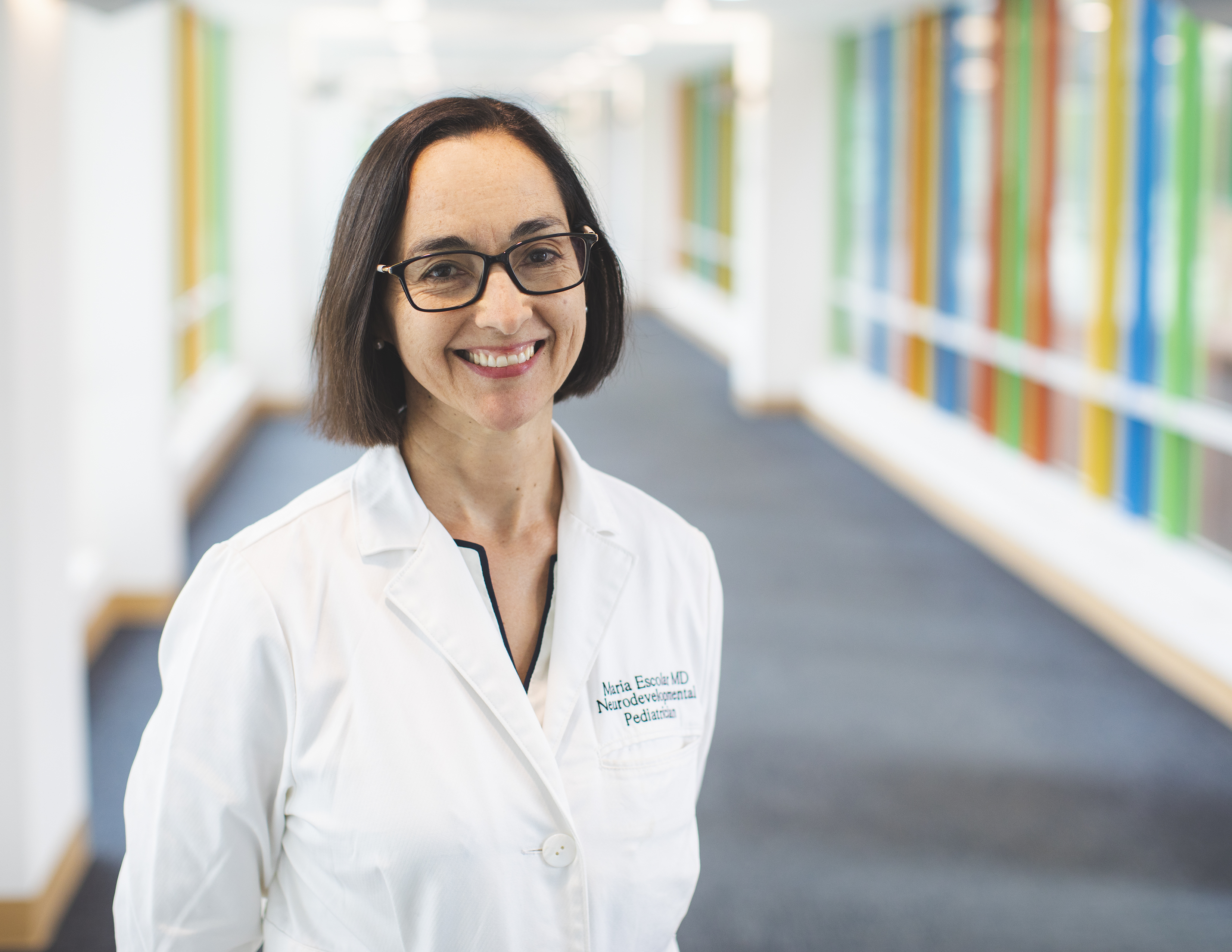 Dr. Maria Escolar, M.D., Director of the Program for the Study of Neurodevelopment in Rare Disorders & Associate Professor, Pediatrics, University of Pittsburgh School of Medicine, is passionate about commercializing therapies she helped develop to treat Krabbe Disease. She wants to correct the genetic defect by developing a gene therapy treatment.

Those suffering from Krabbe do not produce enough of an enzyme the body needs to make myelin, the protective covering of nerve fibers in the brain and throughout the body. It most often afflicts infants in the first few months of life. Because its initial symptoms – feeding difficulties, irritability, vomiting, lack of alertness – are associated with other less ominous conditions, it is often not diagnosed in time for existing treatments to be effective.

Krabbe often progresses quickly causing more severe complications, eventually including loss of hearing and sight, rigid muscles, seizures, cognitive decline and inability to swallow or breathe. It is a devastating illness for parents to witness their child’s suffering.

The compassionate side of the Krabbe coin for Escolar is her clinical work, where she is determined to help those parents give their child the best possible life and prepare them for the changes they will encounter as the disease progresses. She brings together a multi-disciplinary team of specialists to counsel parents on feeding, child development, and physical therapy, among others, to provide a tailored care plan. A nurse from her team is available to consult with parents via phone or online conference calls at all times.

Escolar, who has treated more than 200 children with Krabbe, oversaw development of the first neuroimaging tool to predict the disease’s progression, which helps guide her prognosis. Although the standard life expectancy for children with early-infant onset Krabbe is frequently cited as two years, many of her patients live past five as a result of the care regimen she provides to their parents.

A tapestry hangs on her clinic’s waiting room wall with hand-written messages of thanks to Escolar from parents for helping them care for their child when others could offer little guidance beyond sedating the child and waiting for him/her to die.

The passionate side of Krabbe coin for Escolar is developing new treatments that can give hope to future parents whose children are diagnosed with the disease. And now she is on the brink of creating a startup company to make that happen.

After coming to the U.S. in 1986 upon completing her medical degree at the Escuela Colombiana de Medicina, she began working at Duke University Medical Center where she first encountered children with Krabbe and other so-called lysosomal storage diseases, such as Sanfilippos’s syndrome, Tay-Sachs disease, megachromatic leukodystropy and others that are a result of the body lacking enzymes that eliminate unwanted substances.

Escolar’s voice trembles in frustration recounting the case of a family who battled an insurance company that did not want to cover treatment of their child by Escolar. Weeks passed as Escolar and the family traded communications with the company. She said she told the family to “just come” and she would reach out to the foundation that has been supporting her work since 2010 to help defray the expense. By this point it was too late to attempt a cord blood transplant.

When Duke showed little interest in Krabbe, she moved her work to nearby University of North Carolina, where she dove headlong into researching and caring for children with rare neurological disorders.

In 2011, Escolar was recruited to join the Children’s Hospital of Pittsburgh of the University of Pittsburgh Medical Center, where she relocated her program, which was renamed the Program for the Study of Neurodevelopment in Rare Disorders (NDRD). Joining her in the move was her husband and sometimes collaborator, Paul Szabolcs, who was appointed chief of the newly established Division of Blood and Marrow Transplantation and Cellular Therapies at UPMC Children’s Hospital of Pittsburgh and professor of pediatrics at the University of Pittsburgh School of Medicine.

When Escolar needed a chemotherapy regimen for cord blood transplantation that was less toxic to make treating children with Krabbe not as dangerous to the child while still resulting in a successful graft of the donor cells in the child’s marrow, Szabolcs was able to deliver.

Szabolcs said the move to Pitt and Children’s Hospital gave him and Escolar the “intellectual freedom” to pursue the new treatment protocol for reduced intensity chemotherapy. He said it has been so successful that it has been adapted to treatments for other diseases, such as sickle cell anemia and thalassemia.

While the cord blood transplant has been shown to be slow the disease progression if administered early enough, Escolar is looking to go one step further to correct the genetic defect by developing a gene therapy treatment that delivers the correct version of the mutated gene via a modified virus that would be done in tandem with the blood stem cell transplantation.

“If our trials can show that Krabbe progression can be halted it would be a major breakthrough for these families,” she said.

“If our trials can show that Krabbe progression can be halted it would be a major breakthrough for these families,” she said.

“The work that Dr. Escolar done on behalf of children and families dealing with the devastating diagnosis of Krabbe is inspiring,” said Maria Vanegas, senior licensing manager for life sciences at the Innovation Institute, who has worked alongside Dr. Escolar to protect her intellectual property and pursue options to license the technology and develop a startup company to further develop the new therapy. “It is exciting to see her now taking the next step from treating the disease to trying to halt its progress.”

As long as the odds of contracting Krabbe may be, Escolar’s research has been aided by a foundation established by a Minnesota couple who overcame even more staggering odds.

Sue and Paul Rosenau’s granddaughter died in 2003 after suffering the effects of Krabbe. On the fifth anniversary of her passing, they won a massive lottery jackpot of more than $200 million – beating odds of one in 292 million.

They immediately established The Legacy of Angels Foundation to support research into Krabbe and other rare disorders.