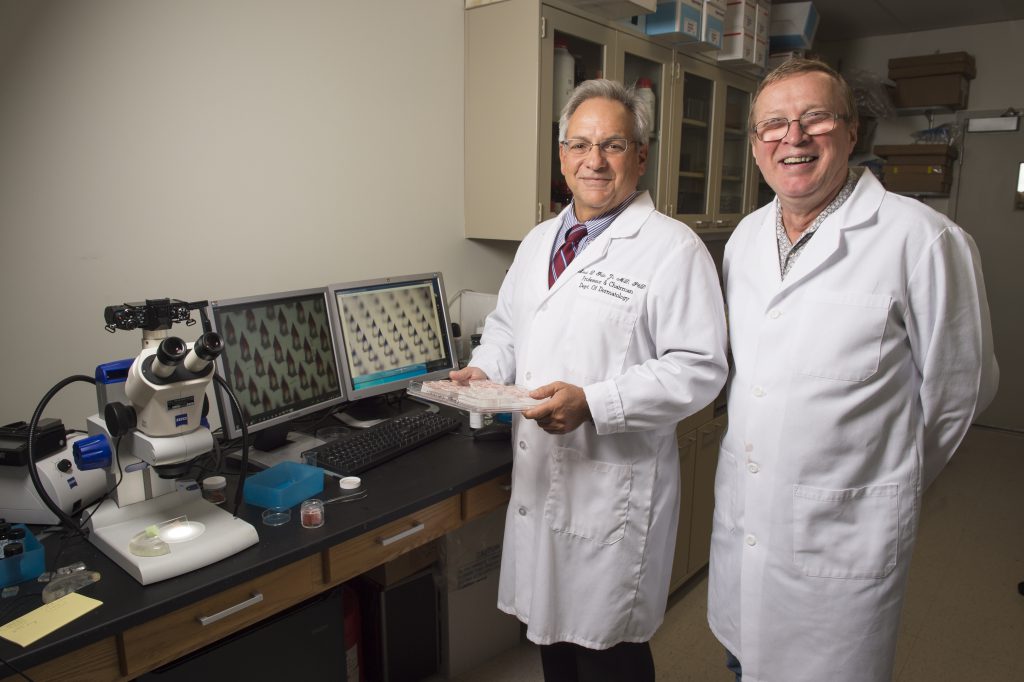 Louis Falo, Chairman of University of Pittsburgh Medical School’s Department of Dermatology, was searching for a better way to deliver vaccines through the skin, which he says generates a stronger immunogenic response for the body than muscle.

But during the course of his research, what Falo discovered is a more effective, less painful and less expensive method to treat skin cancer. In order for his innovation to improve the lives of potentially thousands, or even millions of people, he immediately turned his attention to commercialization.

Just as with scientific research, where the process of discovery rarely flows neatly from hypothesis to confirmation, commercializing a university discovery often follows a winding road from initial concept to market. Both processes require the innovator to be open to new ideas and new lines of inquiry, and to seek out collaborations with people having complementary skills and perspectives.

So it was for Falo, who was helped along his translational journey by a collaboration with Carnegie Mellon University engineering and materials science Professor O. Burak Ozdoganlar.

The parallel process to negotiate the regulatory framework and bring his idea to the market moved forward with the help of the Coulter Translational Partners II program, administered through Pitt’s Swanson School of Engineering, the School of Medicine, and the Pitt Innovation Institute. The project also received an early investment and mentorship from Pittsburgh tech entrepreneur Anthony Florence.

“The participation of several Pitt schools and functional units, as well as a co-inventor from the faculty at our neighboring institution CMU and a savvy early-stage technology entrepreneur and investor, is a quintessentially Pittsburgh story,” said Alex Ducruet, Director of Licensing and Intellectual Property at the Innovation Institute, who negotiated the  license agreement on behalf of the University with SkinJect Inc., the startup company formed around this technology.

“It is reflective of the ‘do what it takes’ ethos typical of the collaborative approach to problem-solving often seen in Pittsburgh.”

When Falo and his colleague Geza Erdos first contemplated new vaccine platforms that utilized the skin as opposed to injections into muscle, it occurred to them that immunology-based treatment of skin cancer had been proving increasingly effective. Their innovation was to mold the therapeutic into a micro-needle array and deliver it via a thin medical patch resembling a Band-Aid.  Once applied, the needles, composed of an existing therapeutic compound, penetrate the skin and then dissolve in 15 minutes.

“We use the patient’s tumor cells as the vaccine to immunize against the patient’s own cancer by stimulating an immune response in that area of the skin,” Falo said. “In this way we don’t necessarily need to kill all of the cells directly with the therapeutic. This results in a treatment with low toxicity, no scarring, and less risk of infection compared to the current state of the art, which is Mohs micrographic surgery, which can be expensive, painful, and disfiguring.”

Finding a Collaborator Next Door

In order to develop the needle array, Falo began a search for global experts in micro-machining. He found Ozdoganlar next door at Carnegie Mellon.

“I called him up and then walked over to meet him,” Falo said. “The best discoveries come from bringing people and ideas together. 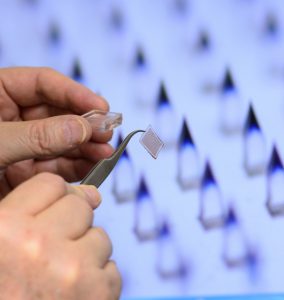 SkinJect is a great example of that philosophy.”

Ozdoganlar eventually honed the design for the tiny dissolvable needles into a form similar to the Washington Monument in the nation’s capital. The needles are firm enough not to break, yet skinny enough to penetrate.

Falo’s idea was accepted into the Coulter Translational Partners II Program, which provided funding for product development as well as project management support and assistance with developing a regulatory strategy. Coulter also coordinated the recruitment of serial entrepreneur Jim Nolan to mentor Falo.

It was Nolan who helped to position the invention as a drug rather than a device, a distinction that has helped put it on a faster track for regulatory approval, since the active ingredient is an FDA-approved therapeutic.

Max Fedor, Coulter Program Director, said, “I am extremely pleased that we were able to make an impact on the translation of this particular project.  Aside from the fact that the technology will provide significant clinical benefits, SkinJect also has the potential to contribute to our growing regional economy.  The Coulter Program is a great example of how the University is developing relationships across the business, research and clinical communities to help formulate viable pathways for commercialization of our technologies.”

“Coulter has done a terrific job taking projects at an early stage and determining their feasibility as a marketable product,” Falo said. “Without Coulter, this all would not have happened.”

Long Road from Lab to Market

The microneedle technology is currently in a Phase I clinical study being conducted at Pitt to determine its safety. If successful in Phase I, it will move to Phase II and Phase III trials, potentially starting later next year, to test for effectiveness, concentrating initially on non-melanoma t-cell lymphomas, which Falo said are rarer forms of skin cancer with few effective treatments.

“This product has the potential to transform the fields of dermatology and oncology. Its commercial future is extremely promising,” said Nolan.

Falo said the commercialization process can be a challenge for a clinician, but he said the end goal of benefiting society keeps things in perspective.

Bringing a product to market “takes a lot of determination and a sense of purpose. It is incredibly satisfying at the end of the process to see the fruit of your efforts making a difference to the patient,” Falo said.