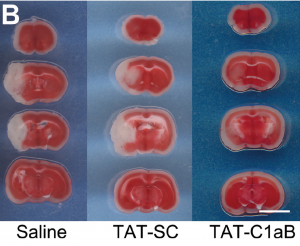 Stroke—the sudden death of brain cells due  to  blockage  or  rupture  of  an artery—kills nearly 140,000 Americans  each  year.  That’s 1 out of every 20 deaths. It is also the leading cause of long-term disability, with survivors often facing a devastating reduction in their independence and quality of life. Acute stroke treatment involves surgery or clot-dissolving agents, which —if applied quickly —can improve the odds of survival and reduce complications. Our novel peptide could work in conjunction with these treatments to extend the window for treatment and further reduce the lasting  effects  of  a  stroke  by preventing neuron loss. Since many modes of neuronal cell  death  share the same mechanism  of  action,  this  peptide could also  be  applied  to traumatic brain injuries (TBI) or neurodegenerative diseases.

The apoptotic cell death pathway following neuronal injury requires insertion of the   Kv2.1   channel into   the   cell   membrane, causing a massive loss of intracellular potassium. Binding of the SNARE protein, syntaxin, with Kv2.1 is a necessary step in this pathway. We have demonstrated that overexpression of the SNARE-binding intracellular Kv2.1 domain alone is neuroprotective in vitro. Our novel peptide(TAT-C1aB)—derived from the C-terminal SNARE-binding region of Kv2.1 —disrupt the insertion of Kv2.1 channels to prevent neuronal death upstream of the potassium current surge. In mice, this peptide significantly reduced stroke damage and improved neurological outcomes. As the apoptotic action of Kv2.1 is involved not only in stroke, but also in several neurodegenerative diseases, our novel peptide could prove to be useful for neuroprotection in many different contexts.