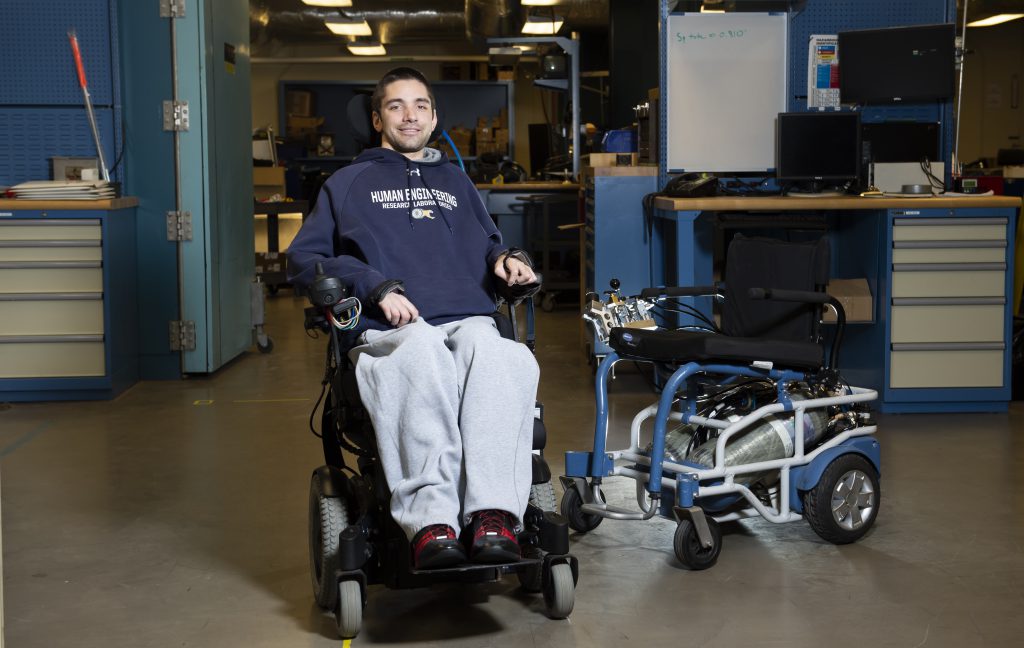 Brandon Daveler in the Human Engineering Research Laboratories, next to a prototype of the pneumatic wheelchair he hopes to bring to market.

Brandon Daveler came to the University of Pittsburgh after earning an engineering degree at Penn State determined to help people with disabilities, like himself, live more independent and fulfilling lives.

Now, as he approaches completion of his PhD, he is taking his independence into his own hands in a way he had previously not contemplated — as an entrepreneur forming a start-up company around one of his lab’s innovations.

Daveler chose to pursue graduate studies at the Human Engineering Research Laboratories (HERL), a partnership between Pitt’s School of Health and Rehabilitation Sciences, UPMC and the U.S. Department of Veteran’s Affairs, because of its reputation as one of the nation’s most robust translational research programs for assistive technologies.

“As a power wheelchair user, I live the problems that I am trying to solve,” he said. “Before my injury I was an outdoors enthusiast, so I was happy to be working on a project that could help people like myself be more independent when outdoors.”

He was excited when his name appeared as a contributor to a U.S. patent for MEBot. After earning his master’s degree, he began working on his PhD with the plan that he would make a career in academia with a focus on applied research.

That’s when his PhD dissertation project, a scooter powered by compressed air instead of a battery, took an unexpected turn, motivating him to bring the idea to market himself.

HERL was contacted by the Sports Outdoor and Recreational (SOAR) foundation, creators of Morgan’s Wonderland, a theme park in San Antonio, Texas, designed for children with special needs. HERL’s work on the air-powered scooter offered a possible solution for their need of a power wheelchair that could get wet so that power wheelchair users could enjoy the waterpark portion of the theme park independently, since they could not use their electric powered wheelchairs in water. 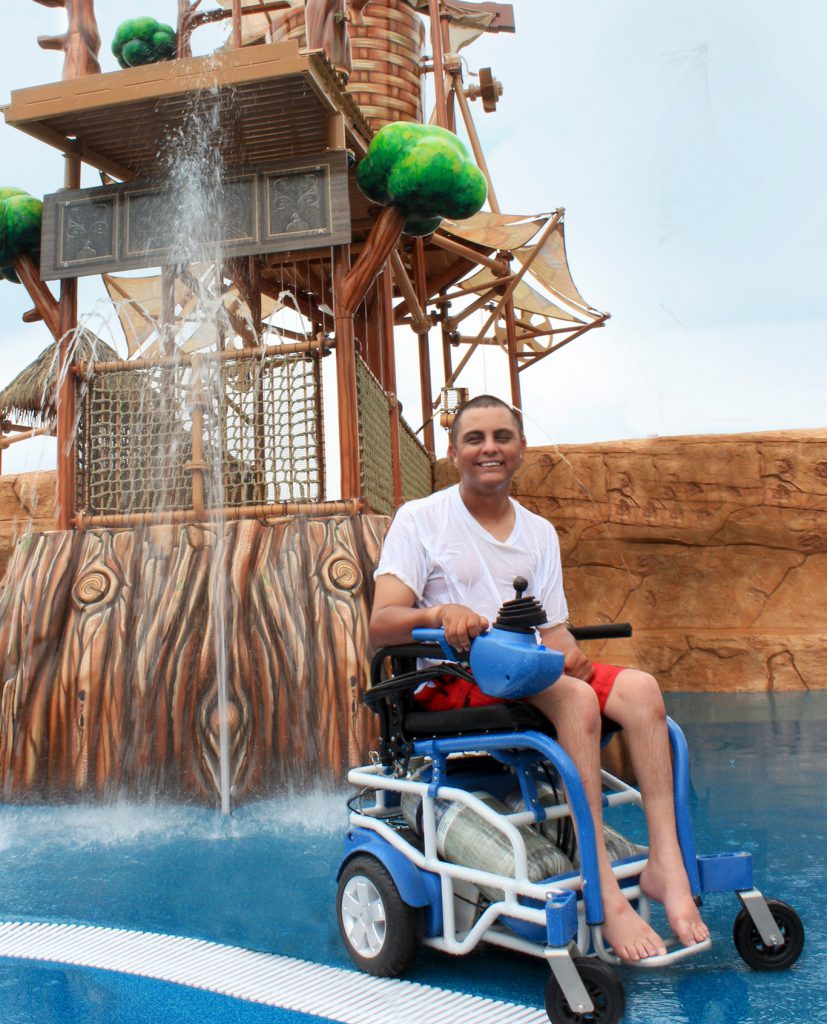 A patron enjoys the Morgan’s Wonderland theme park in San Antonio, Texas in the pneumatic wheelchair built at the University of Pittsburgh Human Engineering Research Laboratories.

The team dove into the project. When the prototype debuted at Morgan’s Wonderland, it became a media sensation, with stories appearing in newspapers and online sites across the nation, including the New York Times.

Daveler said inquiries started pouring in to HERL about the chair. He said the Federal Emergency Management Agency expressed interest in having the chairs for temporary use in areas left without electricity after natural disasters as did Jewish groups that refrain from using electricity during the Sabbath.

After the Morgan’s Wonderland nonprofit declined to move forward with licensing the technology beyond water parks, Daveler decided that he would do it himself. He said he continues to work with the park in refining the chair as the park has been generous in providing user feedback.

For one thing, the original joystick used to drive the chair required too much force for some of the guests to operate, so Daveler said a new joystick was designed that requires less force, more in line with electric powered wheelchairs.

Daveler said he has been guided every step of the way on his entrepreneurial journey by his colleagues at HERL and the Innovation Institute.

“(At HERL) you can go from an idea to a fully functional prototype in the same building,” he said, referring to the professional machine shop in the basement of the lab’s offices in the Bakery Square building in Pittsburgh’s East Liberty neighborhood. “You have the expertise of some of the most world renowned people in mobility and assistive technology development. Having a well-rounded team around you is critical to being successful.”

Daveler participated in the Pitt Ventures First Gear program at the Innovation Institute, where over the course of six workshops he explored the value the air powered chair might deliver to potential customers. Working one-on-one with an experienced business mentor, participants receive $3,000 from the National Science Foundation’s Innovation Corps (I-Corps) program to help conduct market research.

He also entered two of the many pitch competitions offered at Pitt that provide prizes to help innovators advance their ideas towards commercialization.

He won a first place prize and $15,000 for the Pitt Ventures Student Challenge’s Kuzneski Innovation Cup in 2017, and then a $5000 third place prize in the 2019 Randall Family Big Idea Competition. 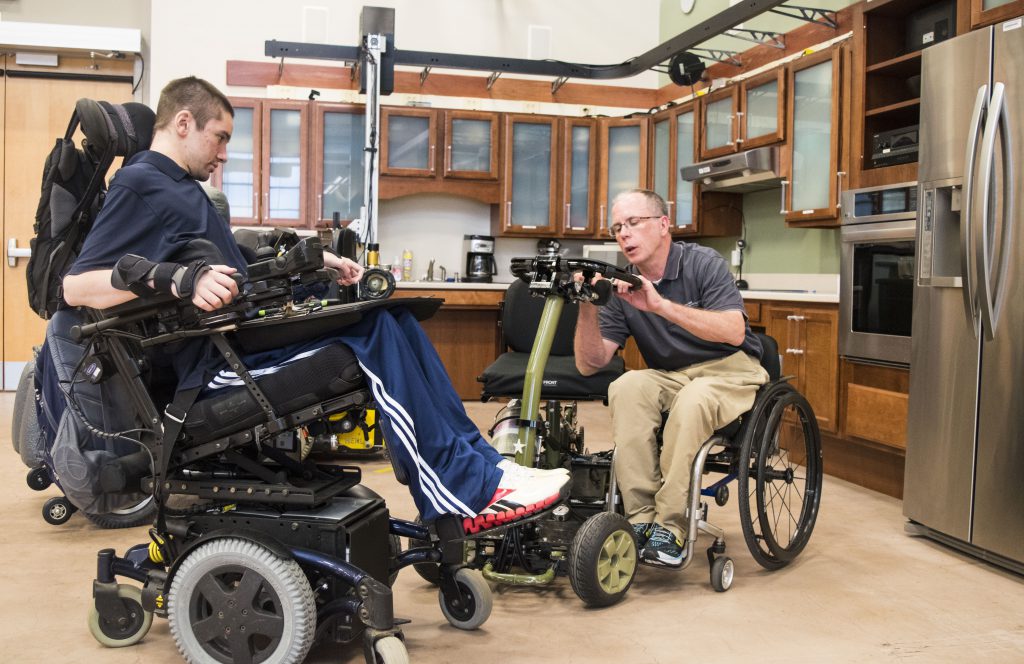 Brandon Daveler and Dr. Rory Cooper, founder and director of HERL at the Bakery Square lab. HERL is one of the nation’s most robust translational research programs for assistive technologies.

“The mentoring I received through the Innovation Institute and its programs gave me the confidence that I could make the transition to being an entrepreneur,” he said.

“It has been gratifying but not surprising to see Brandon’s transformation from student to entrepreneur over the past few years,” said Innovation Institute licensing manager George Coulston. “It is a testament to the entrepreneurial culture at HERL, where so many impactful assistive technologies have been translated into real products that are improving people’s lives.”

Daveler is also a participant in Pitt’s Coulter Translational Research Partners II Program that provided $100,000 towards the commercialization of the air-powered wheelchair technology of which will be used to perform pilot tests in long-term care facilities and big-box retailers. “I want to see if the problems I think they have are the problems they actually have,” he said.

With his studies winding down, Daveler applied and was accepted to the Innovation Work’s AlphaLab Gear accelerator for his new company, which he has named Atimize. In addition to refining the chair design, Daveler’s plan over the next six months at AlphaLab Gear is to do more customer discovery work and implement a manufacturing plan with the goal to begin producing the chairs in the fall of 2019.

“Getting that first sale will confirm for me that this is a business. I know nothing is for certain in this, but I am excited for what the future has to hold,” he said.