When Dr. Robert Ferris arrived in Pittsburgh to study cancer immunotherapy 15 years ago, the field was limited. Therapies that stimulate the body’s natural immune response to fight cancer were thought to be impractical, ineffective, and even potentially harmful.

But at the university where the polio vaccine was developed, there was always a belief in the dark horse approach of outwitting cancer’s ability to elude the immune system.

“We built cancer immunology before it was cool, before it started working,” says Ferris, who is a UPMC Endowed Professor, chief of the Division of Head and Neck Surgery, and co-leader of the Cancer Immunology Program at the University of Pittsburgh Cancer Institute (UPCI). “We maybe ran down a couple of rabbit holes, but it’s all contributed to the field.”

Today, Pitt is a leading research center for the exploding field of cancer immunotherapy, and is now seeing several of the discoveries developed in its laboratories being licensed to startup companies. These cutting-edge therapies are attracting millions of investment dollars and industry partners to proceed through costly clinical trials, with more promising research continually coming to fruition.

Ferris says that what immunotherapy has achieved in the past few years is “proof of principle.” Moving forward, the question will be how to best combine it with existing cancer treatments, which will require ongoing trial and error. He notes that immunotherapy is now being referred to as “the fourth modality” in cancer treatment, following surgery, chemotherapy, and radiation.

“The new dawn, if you will, is integrating [that] fourth modality.” Dr. Robert Ferris

In October, the FDA for the first time approved an immunotherapy as the first line treatment for cancer. It gave the approval to Merck’s Keytruda for the treatment of lung cancer. Keytruda is the same drug that stopped the progression of melanoma in President Jimmy Carter’s brain last summer. The drug’s success in the trial for lung cancer caused the FDA to halt the trial so all the participants could receive the drug. With Keytruda, the U.S. Food and Drug Administration has now approved four checkpoint inhibitors — a type of immunotherapy that acts as an “off switch” for cancer cells ability to block the immune system. This in turn allows the body’s invader-fighting T cells to attack a tumor.

In a recent 361-person study, published in the New England Journal of Medicine, Ferris and his team compared another checkpoint inhibitor, nivolumab, to standard chemotherapy in a randomized trial. To the research team’s shock, nivolumab doubled survival rates in head and neck cancer patients compared to chemo. All participants had a rapidly progressing form of head and neck squamous cell carcinoma, but 36 percent of the nivolumab group survived 12 months after treatment versus 17 percent of the chemotherapy group. Patients on the drug also reported a stable or improved quality of life, while those receiving chemotherapy alone reported a decline. As with the Keytruda study, the FDA approved discontinuing the study and providing nivolumab to all participants.

Though cancer immunotherapy has only recently attracted headlines, the field has a long history in Pittsburgh. UPCI was founded in 1985 by Dr. Ronald Herberman, an immunologist. Herberman believed that understanding how tumors progress could help prevent cancer from spreading. He went on to discover the natural killer (NK) cell, an aggressive type of white blood cell that could be stimulated to help a patient’s immune system fight cancer.

The ideas behind some recent immunotherapies arise from a similar philosophy: focusing on disrupting the cancer’s so-called “microenvironment” that supports resource-hungry tumors and suppresses the body’s natural immune response.

One of the compelling things about immunotherapy, says Dr. Greg Delgoffe, is that it harnesses patients’ preexisting capacity to fight disease. Delgoffe is an assistant professor of immunology and member of the Tumor Microenvironment Center at UPCI. A previous stumbling block to immunotherapy was the idea that the body would never recognize cancer — the body’s own unchecked cell growth — as a “foreign” invader. Cancer, says Delgoffe, is traditionally thought of as “you gone wrong.” As oncologist Dr. Siddhartha Mukherjee wrote in The Emperor of All Maladies, “Cancer’s life is a recapitulation of the body’s life, its existence a pathological mirror of our own.”

Thus, traditional cancer therapies like chemotherapy are associated with toxicity, harsh side effects, and a scorched earth policy. But with immunotherapy, “You have some of this kind of healing power inside of you,” says Delgoffe.

Delgoffe’s lab is exploring how a tumor microenvironment “starves” cancer-destroying T cells by shrinking or stopping their production of mitochondria, which are cellular building blocks essential for generating energy. Their research is also investigating different methods to restore T cells’ energy, helping to reboot the immune system. They have used both genetic engineering as well as pharmacologic agents in an effort to “tip the metabolic balance” so that T cells are not inhibited in the tumor’s microenvironment.

Recently, Delgoffe has been focused on “moving ideas through the pipeline” in order to explore their future commercial possibilities so that they can have an impact on people’s lives.

Moving From the Lab to the Market

Increased commercial activity in immunotherapy at Pitt is occurring as senior university leadership, with the encouragement of Chancellor Patrick Gallagher, have worked to streamline the policies and processes for commercializing Pitt research. The University’s Innovation Institute has also been developing more internal and external resources for providing so-called “gap funding” to de-risk early stage discoveries in order to make them more interesting to potential industry partners or as startup opportunities. Created in 2013, the Innovation Institute offers a host of services to establish and provide commercialization education and mentoring, protect intellectual property (IP), and connect researchers with external partners in order to expedite the process of translating discoveries from the lab to market. 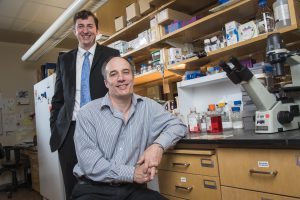 In the past two years, Pitt has seen three experimental cancer immunotherapy innovations spin out into companies and quickly attract major investors and industry partners. Two of them take the approach of genetically altering viruses to become cancer killers.

Pitt molecular biologist Dr. Stephen Thorne describes his company’s virus, WO-12, as a “Swiss Army knife” with multiple functions. The virus first enters a tumor after being injected intravenously through the blood stream and replicates, killing cancer cells directly, then activates the body’s immune response. The virus is able to evade the body’s immune system thanks to Thorne and his team’s modifications. In mouse models, says Thorne, WO-12 has cleared tumors up to 100% of the time.

Thorne filed an invention disclosure with the Innovation Institute in 2013, taking advantage of its  “Express License” template designed to expedite the licensing process and lower its initial expenses. He then opted to take a leave of absence from the university to become chief scientific officer of Western Oncolytics, the startup formed around his technology.

“In 10-15 years, we can imagine that a patient could receive several infusions [or] injections over a period of a few weeks or months of a variety of treatments. Pfizer seeks to become a significant player in the rapidly emerging field of immune-oncology by applying a significant array of immunotherapy approaches to treating patients.” Dr. James Merson, Pfizer

Western Oncolytics isn’t the only recent success story in the oncolytics space from Pitt.

“As far as an unmet medical need, it’s gigantic,” says Glorioso, who serves as chairman of the company’s scientific advisory board.

Oncorus’s oHSV is injected into a patient’s tumor, killing cancer cells, and also inducing an immune response. Both technologies approach personalized medicine, in which the virus triggers an individual’s immune response effective for fighting their specific tumor.

In the realm of combination therapy, Dr. Louis Falo developed an unlikely cancer treatment: a thumb-sized array of mirconeedles. Falo, a Pitt professor and Chairman of the Department of Dermatology at the School of Medicine, is the co-developer of the technology licensed to the startup company SkinJect Inc. Targeted initially at basal cell and squamous cell skin cancers, the SkinJect patch, which looks like a slightly modified Band-Aid, deploys the chemotherapy drug doxorubicin

Dr. Louis Falo and his colleague, Dr. Geza Erdos, in their lab with samples of the microneedle arrays they developed for treating skin cancer.

through dissolvable microneedles less than a millimeter long. Once planted in the skin, they dissolve in 10 to 15 minutes, to be applied at a doctor’s office once a week.

“Essentially what happens is the tumor becomes a vaccine,” says Falo. The skin has an inflammatory response—which Falo compares to “a small spot of poison ivy”—activating the immune system, killing cancer cells, and healing the cancerous lesion. The hope is also that after a course of treatment, a patient’s immunity would continue, preventing cancer recurrence. A licensing agreement for SkinJect was completed with Pitt in August.

Since its licensing, the company has attracted investor attention. Along with contract research organization Clinica, Inc., SkinJect was targeted to receive $35 million from O’Hara-based Velocity Fund Partners. The patch also began its phase I clinical trial. Falos credits Pitt for its help with commercialization.

“Without the Innovation Institute, this wouldn’t have happened,” says Falo. “To go from a scientist and a clinician making a discovery to turning that discovery into a usable product through the commercialization process is very complicated. [The] Innovation Institute really connect[s] the two and help[s] investigators see where their discoveries can go.”

For more information on these and other immuno-oncology technologies in Pitt’s portfolio, contact licensing managers Maria Vanegas or Andrew Remes.