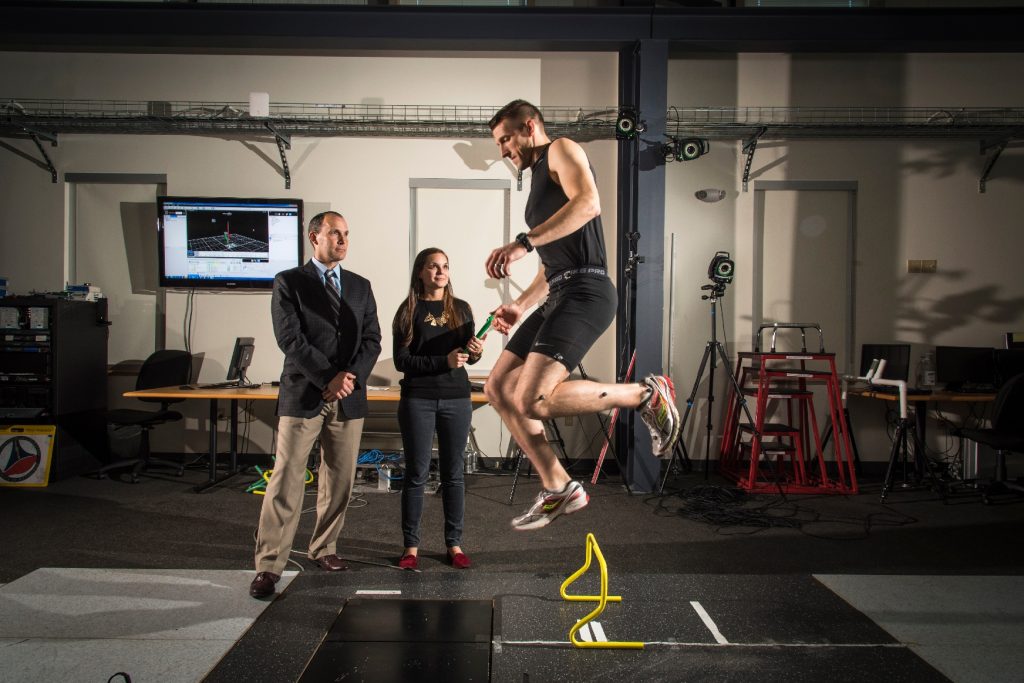 A wayward punt from the sprawling grass fields of the neighboring UPMC Sports Performance Complex could just about drop on the Pitt Neuromuscular Research Laboratory in Pittsburgh’s South Side.

The co-location of these facilities allows elite athletes from the University of Pittsburgh who train at the UPMC complex to conveniently participate in the lab’s advanced musculoskeletal injury detection, prevention and rehabilitation research.

But the lab’s faculty and student researchers are curious how the technologies they are developing for athletes and the U.S. Special Operation Forces can be translated to benefit the general population. They have turned to the Pitt Innovation Institute for help.

For the past year, Innovation Institute entrepreneur-in-residence Phil Marzolf has held office hours at the lab one day a week scouting for opportunities and coaching the lab’s innovators on the commercialization mindset and process.

Heather Bansbach, a third year doctoral student, said the guidance she has received from Marzolf and the Innovation Institute has de-mystified the commercialization process and opened her eyes to pursuing an entrepreneurial path after completing her degree.

“It’s exciting to bridge the gap from the laboratory to something than can be a marketable product,” she said.

Studying in the lab of associate professor and physical therapist Timothy Sell, Bansbach is working to develop a startup called AccelMOTION around a portable platform for collecting body motion data that communicates wirelessly and allows for remote or automated analysis.

With the idea still in its infancy, Bansbach entered the Wells Student Healthcare Entrepreneurship Competition organized by the Innovation Institute last fall. Her pitch was compelling enough to earn the runner-up prize of $5,000.

To begin the process of validating her innovation for its commercial potential, Bansbach enrolled in the Innovation Institute’s inaugural Pitt Ventures First Gear cohort funded through the NSF I-Corps program. Each First Gear participant works one-on-one with an experienced mentor. In Bansbach’s case, it was Marzolf.

With his guidance and utilizing an additional $3,000 in I-Corps seed funding, Bansbach had to climb out of her research comfort zone to approach potential customers to discover what their needs are and how her technology could meet them, or uncover a need that potential customers didn’t know they had.

Bansbach initially considered a mass market approach to sell the platform directly to recreational athletes before quickly determining that would be a difficult approach given the explosion of wearable fitness devices. With Marzolf’s help she narrowed her target audience to physical therapists, who could use the device with their patients to reduce the number of in-person appointments necessary during a treatment regimen. Patients could be prescribed the device during the course of their treatment and information on balance, strength and range of motion could be transmitted to a cloud-based platform so therapists could monitor progress remotely.

At the end of the First Gear program, Bansbach successfully applied for a second phase of the NSF I-Corps program that awards $50,000 upon completion. Over the next two months she will determine what the minimum viable product features are for which her customers would pay, and assemble a group of alpha users to help validate the product and service.

“Our goal is to not spend one minute more than necessary pursuing a bad idea,” Marzolf said, adding that at the end of the next two months, Bansbach will know whether to keep going with the current model, or whether to pursue another opportunity.

Bansbach competed in the Randall Family Big Idea Competition, the annual business plan competition managed by the Innovation Institute that awards $100,000 in prize money to startups launched by students to help further shepherd their ideas along the path to market.

Marzolf says that partly due to Bansbach’s pioneering step forward, there are now three other research projects that could bloom into commercialization efforts from the Neuromuscular Research Lab, which counts among its clients the U.S. Special Operation Forces as part of the Warrior Human Performance Research Center.

“I’m noticing that commercialization of university research is becoming less of a threatening black box and being eyed as more of an opportunity,” Marzolf said. “It’s good to have an emerging success story like Heather and AccelMOTION to build credibility for the Innovation Institute and continue to build an ethos of entrepreneurship at Pitt.”

The Innovation Institute Pitt Ventures First Gear program is accepting applications. If you are working on an invention developed from university research, you can learn what it takes to take the innovation to market through six workshops that will help you identify its value proposition through a flipped classroom discovery process.

Simply click the button below to get started on your journey.