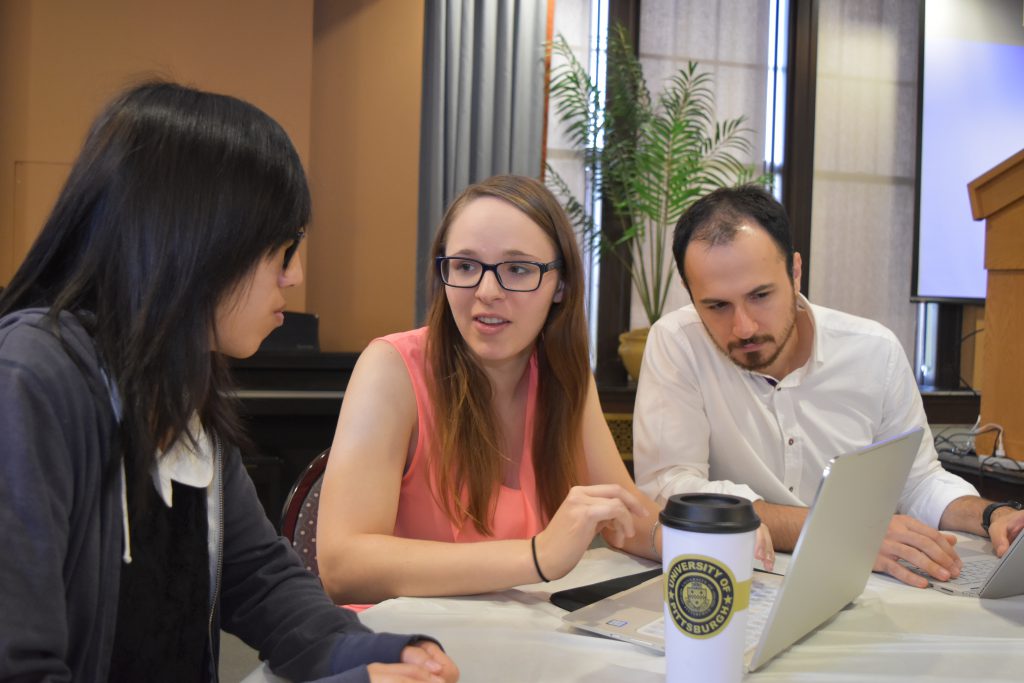 Michelle Pressly, center, and members of the Maternal Assistance team Kutay Sezginel, left, and Alex Wallace, right, work on their presentation prior to the Startup Blitz pitch competition.

Jenna Gustafson and Megan Cala, doctoral candidates in the Chemical Engineering department, brought their idea for a breathalyzer for cancer screening to the Innovation Institute’s Startup Blitz not knowing what to expect.

Twenty-four hours later they left with two potential new team members, a $1,000 cash award and plans to advance their idea next semester in the Randall Family Big Idea Competition.

Gustafson and Cala were among the nearly 50 students who turned out at the O’Hara Student Center to pitch their ideas and work with an experienced entrepreneur in residence to craft a customer value proposition and then pitch their ideas to a group of VIP judges from local startup accelerators. Click here to view a flickr gallery of the event.

“It was really helpful to have two people join the team who hadn’t heard of our idea until the Blitz started,” Gustafson said of recruiting fellow engineering doctoral student Henry Ayoola and Chidi Nurakpuda, an undergraduate biology major, to the team after the initial round of student pitches narrowed the teams down from nearly 30 to eight.

“They brought a new perspective and allowed our concept to evolve over the day. Also, speaking with the entrepreneurs-in-residence really helped us narrow down a product and how to market it, as well as giving us the confidence to sell our idea. We were really pushed to stretch beyond our comfort zones,” she said.

Gustafson’s team, under the name Common Sense, took second place in the pitch contest. First place went to another team, Maternal Assistance, which is also primarily comprised of students from the Swanson School of Engineering.

Maternal Assistance team is developing an algorithm that predicts risk of maternal hemorrhage based on a set of clinical tests routinely performed upon arrival for labor and delivery.

“The experience at the Blitz helped me learn about how the startup process works, something I had little knowledge of beforehand,” Pressly said. “Additionally, the process aided in my ability to articulate this idea in an accessible way. I learned a lot from each of the EIRs and my teammates, who challenged me to think of multiple perspectives on this idea and approach.”

Third place and $500 went to the Ghost Trekkers team of Mackenzie Coat of Arts & Sciences, Sridhar Velagala of Electrical and Computer Engineering, Ev Durazo of Graduate School of Public & International Affairs and Zhengjia Fu, of Arts & Sciences. The team, led by Coates, is developing an streaming Internet show about ghosts. Coates, a recent transfer to Pitt, recently filmed an intro for the show at the Cathedral of Learning and is hoping to begin streaming episodes before Halloween.

Babs Carryer, director of education and outreach for the Innovation Institute, said she was overwhelmed by the number of students who pitched ideas at the Blitz and said she urges students whose ideas did not advance to the second day to not give up.

“Often an initial idea needs additional exploration and refinement, what we call a ‘pivot’, to be successful,” she said. “I will be following up with each of the students who pitched their idea on the first night of Blitz and suggest they reach out to one of our entrepreneurs in residence to discuss ways to improve their ideas so that they might participate in upcoming programming and competitions.

Carryer said another Startup Blitz will be held in January, and applications for the Big Idea competition will be accepted beginning in February 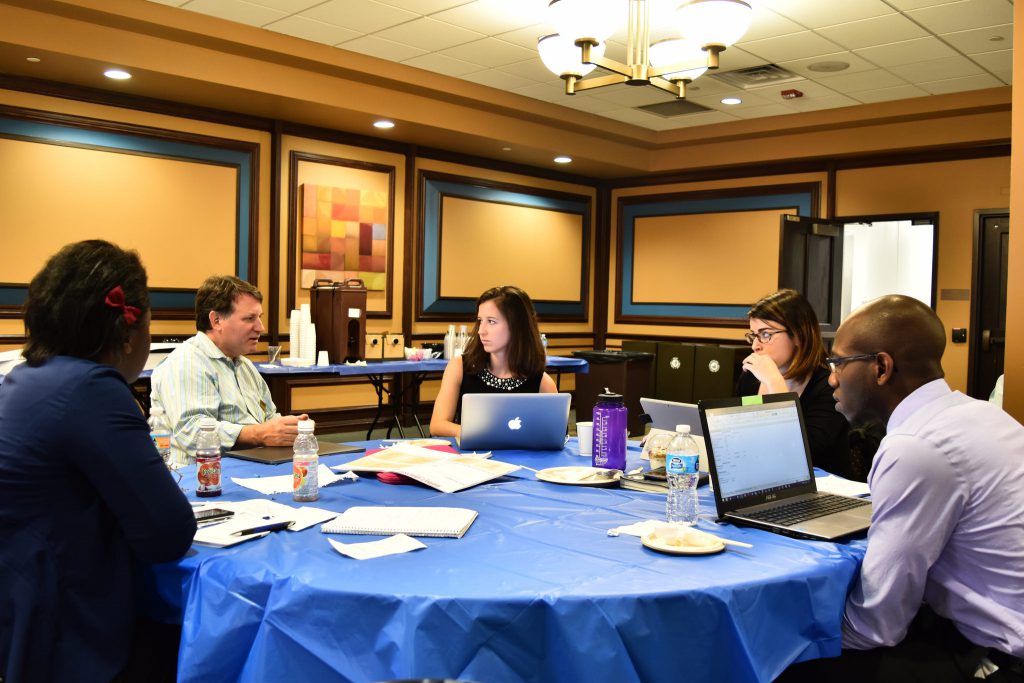 Team Common Sense consults with an entrepreneur in residence during the Innovation Institute’s fall Startup Blitz. The team took second place in the pitch competition.