Building and Leading a Startup Team 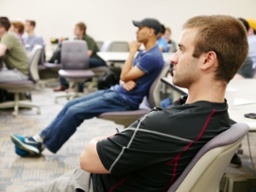 The University of Pittsburgh student accelerator, the Blast Furnace, hosted another great set of speakers recently to discuss the subject of building and leading your startup team during the various stages of growth.

In the Furnace this week were Alan Himler and Henry Wilde. Al, Senior Director of Business Development at Wombat Security Technologies, is a serial entrepreneur, and a graduate of the Katz School. He has over 25 years of experience in product management, business development, and executive leadership roles in the technology industry. In addition, he has delivered expert product consulting and strategy services to a broad list of software clients. He has served in leadership roles and executive management (CEO, COO, VP level) at Malcovery Security (UAB spinout), CombineNet/SciQuest (CMU spinout), eBillingHub/ThomsonReuters, Logic Library/SOA Software, Emprise Technologies/ASG, and Legent Corporation/Computer Associates.

Henry Wilde, our other guest, was for 22 years the CEO and Chairman of the Board of Four Rivers Software Systems. He led the company until its successful sale to Accruent in August 2014. Prior to Four Rivers, Henry was an account executive for four years at NeXT Computer, Steve Jobs’ company between his two stints at Apple. Prior to that, he was a Corporate Account Executive for five years at Wang Laboratories ($3B)

Combined, these two gents have seen, as I like to say, a lot of ‘movies.’ So their advice on what it takes to build and lead a successful team is instructive.

For Henry Wilde, it was always about the team. He emphasized at the beginning of his talk that in an enterprise software company, 81% of his costs “walked out the door every night.” In short, he wasn’t investing in machinery; he was investing in people, their skills, and talent.

Alan Himler then shared his insights about building a team and leading it. Al started by asking a question: Who do you admire as a leader? He stated that in years of asking this question, he rarely, if ever, got a CEO’s name as the answer. And last night was no exception, with sports stars and presidents being the most typical answers. So Al’s key piece of advice: don’t be the leader for the glory.

Similar to Henry, Al broke his advice down into several digestible chunks:

Finally, Al emphasized that the leadership skills that take you from $0 to $1M, and perhaps $1M to $5M, or $5M to $25M are all different. Don’t be afraid to admit when the company has needs that are beyond what you can deliver as a leader. It takes a great deal of maturity to know yourself and if you are still serving the company’s best interest at any stage.

It was again a great evening in the Blast Furnace with lots of wisdom and insights shared about one of the toughest subjects in building a company.