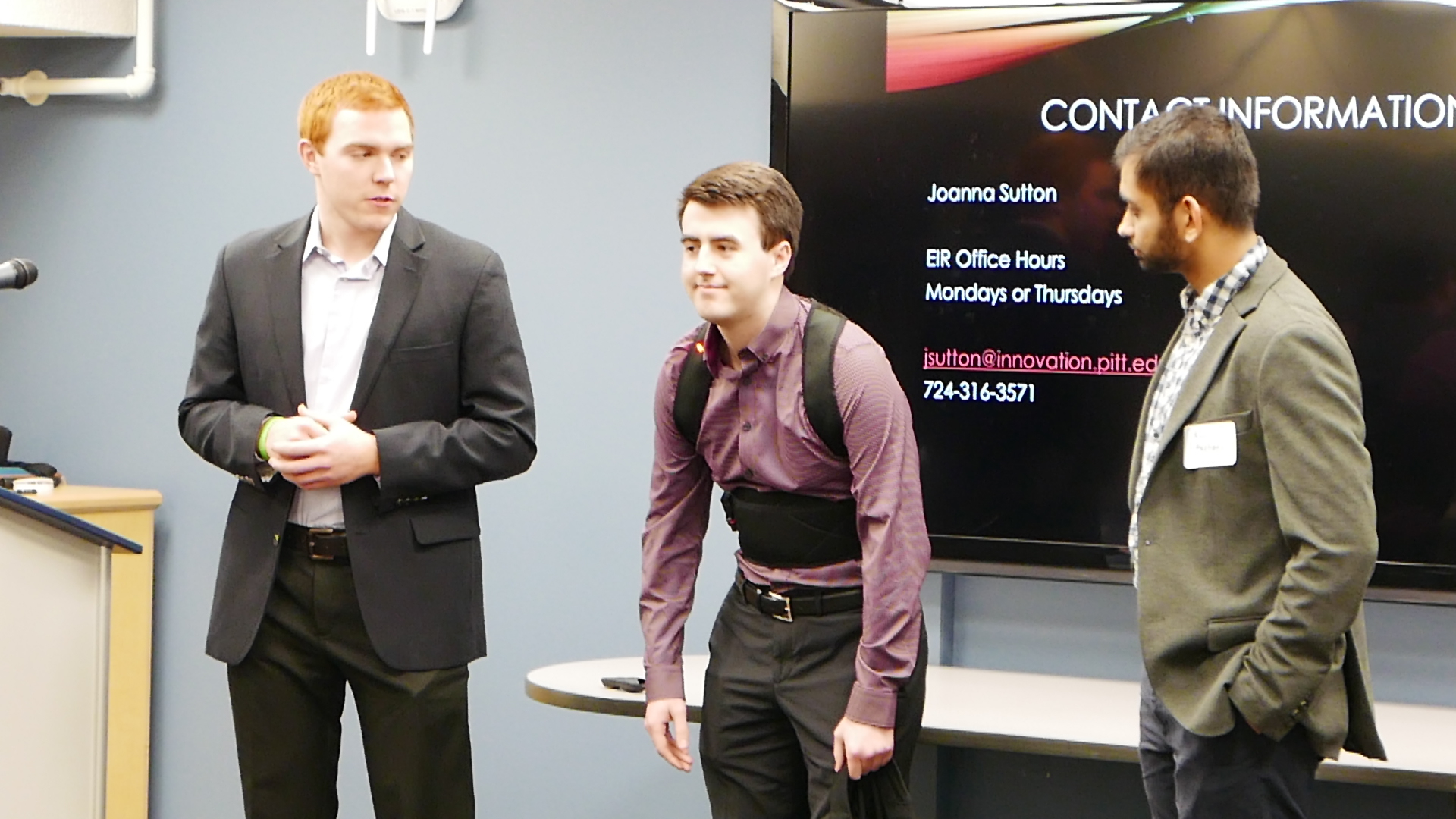 Nearly 50 students with a pent up passion for entrepreneurship came to the Innovation Institute’s spring semester Startup Blitz armed with ideas that ran the gamut from improved battery chargers for electric cars to a robotic system for harvesting produce in a greenhouse to a social media app for choosing a good nickname.

Some had been working on their idea as part of class projects, and others came up with their ideas relatively recently, including two enthusiastic freshman who developed their idea on the spot and won over the crowd.

The event began Friday night at the School of Computing and Information where 20 student teams pitched their ideas after hearing brief presentations from Innovation Institute entrepreneurs in residence (EIRs) on how to launch an idea.

“Startup Blitz is sometimes the first time a team has given serious thought to how they might transform their idea into a business.  The weekend provides a great forum to find inspiration and learn from other like-minded student entrepreneurs. Hopefully, Start-up Blitz is just the first step in the life-long entrepreneurial journey,” said Joanna Sutton, entrepreneur in residence for student programs at the Innovation Institute.

Students then voted on their favorite ideas to narrow the field to 10. Those students whose ideas were not selected then searched out one of the remaining teams to join.

On Saturday, the teams met with the EIRs to flesh out their ideas and begin putting together their pitches for the afternoon pitch competition.

The students concluded the event Saturday afternoon pitching their ideas before an experienced panel of judges that included:

The first place award of $1,500 went to a group of students, primarily from the Swanson School of Engineering, who brought their project from their Art of Making course to the Blitz. The team identified people suffering from Parkinson’s Disease who had their fine motor function affected and developed a solution to improve body posture for this population.

“The Startup Blitz was a great way for our team to expand our horizons and open our eyes to more business aspects of our idea. We had plenty of working knowledge of the technology behind it, but the Blitz was an incredible opportunity to network with and get genuine attention and feedback from very experienced entrepreneurs,” said Tyler Bray, an undergraduate student at Swanson, who led the team under the name Posture Protect.

Exauce Saya, a student at the School of Information and Computing, wasn’t planning on attending Startup Blitz, but happened upon the event when he went to study on the school’s third floor that Friday night. He was going to leave when he learned that an event was happening there, but Dorff invited him to stay and at least watch, which he did. As the event unfolded, however, he lost interest in his regular studies as he began hearing the initial idea pitches and spoke to entrepreneur in residence, Jeanine McCreary, who directed him to the Beacone team, which pitched an idea for an alert system to prevent falls and other workplace accidents.

“He has become a valuable member of the team,” said Teddy Valinski, the team’s leader from the school of engineering.

Valinski said the most valuable aspect of the Blitz was working with the EIRs.

“Talking with the EIRs, we were really able to hone into our product and develop what could become a company around it, as opposed to just a single product,” he said. “They helped us conduct customer discovery effectively, as well as create a revenue model around our idea.”

First place ($1,500)
Posture Protect – A flexible brace to alert people when they are exhibiting bad posture as a result of impaired motor function to train them to maintain good posture

A special “Blitz” Award was created to recognize the passion and creativity of two freshman students who participated. The award of $200 went to Tyler Sikov and Torry Trahanovsky, both of Arts & Sciences, who developed “Handle” a nickname generating app that browses your social media activity to suggest nicknames.

Next up for the students is the Randall Family Big Idea Competition. Now in its 10th year, the Big Idea Competition is the largest of its kind in the region, offering $100,000 in prizes. It is open to students of all levels from across the University. All you need is a big idea to enter. Applications are due February 5. An information session is being held Tuesday, January 30, noon to 1 p.m., at WPU Kurtzman. 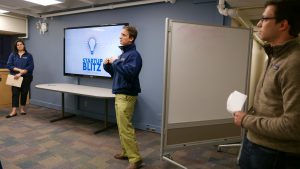 Assistant professor of engineering Chris Wilmer,one of the Startup Blitz judges, talks to the students at the end of the event. 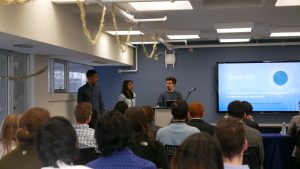 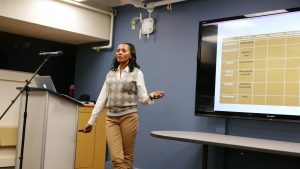 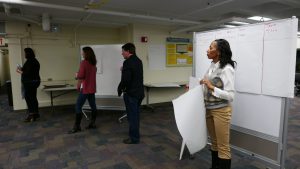 Innovation Institute entrepreneurs in residence for student programs prepare for the voting for the ideas that will make it through to Day 2 of the Startup Blitz. 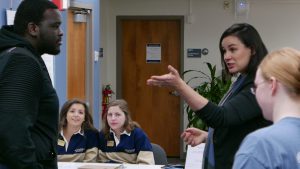 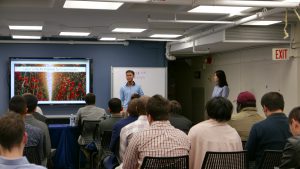 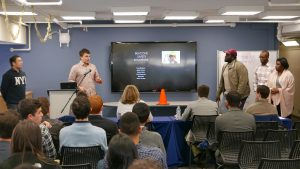 Team members of Startup Blitz first runner up Beacone pitch their idea on Saturday, January 20 at the School of Computing and Information.