Recent News Behind the Judges Table

Behind the Judges Table

As an intern at the University of Pittsburgh Innovation Institute, I consider myself one of the luckiest people at the university. My job allows me to see all of the amazing and inspiring ideas that arise from Pitt students, from undergraduates to post-docs. However, no event showcases our school’s indisputable capacity to change the world like the Randall Family Big Idea Competition.
The second round of this annual Pitt competition, which took place Thursday, March 5, involved more than 85 student teams — nearly double the size of last year’s competition. The teams pitched their hearts out with the hope of advancing their “big ideas” to the final round. I had the unique pleasure of experiencing the competition from the vantage point of the judges’ table. 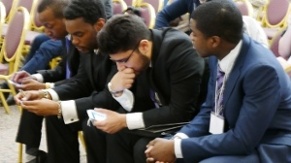 Alongside four distinguished judges, I witnessed 10 pitches, each no longer than 5 minutes. No pitch was alike. The ideas ranged from food service applications and medical devices to informational databases. But, with each pitch, the judges’ questions and assessment criteria remained sternly consistent. Here’s what they looked for:

If there was one thing the judges agreed upon, it was that selecting the 35 teams to advance in the Randall Family Big Idea Competition wasn’t easy. Many ideas have the potential to revolutionize the world around us. As the final round of the Big Idea Competition is right around the bend (April 2), the advancing teams head back to their drawing boards equipped with seasoned guidance.

For the teams that were cut, though, don’t be discouraged. Understand that, by making it this far, you are now a Pitt Innovators. The best thing to do – especially if you’re not graduating yet – is utilize the Innovation Institute’s many on-campus resources to get ahead for next year’s competition, because if you don’t, someone else will…