“I am Dani. I am from Spain. And I am a reasonably good lover.” I thought that would get your attention. It also caught the attention of attendees of this week’s Blast Furnace, the student accelerator at the University of Pittsburgh. It was ‘Alumni Night’ at the Furnace. However the opinions expressed, and the experiences shared, were so much more.
First up, Dani Garcia. 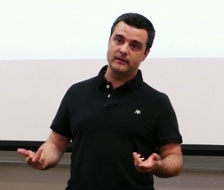 Dani is on his second startup. He and his wife, Gabriela Isturiz, who also spoke to the Blast Furnace cohort, cofounded eBillingHub, then sold it to Thomson Reuters. Now Dani and Gabriela run the successful Bellefield Systems.
Dani began the evening with by saying “I am Dani. I am from Spain. And I am a reasonably good lover.” Dani told the story of sitting in his first class at Pitt in the United States as a native of Spain, and being asked to introduce himself. How many times has that happened to you? Dani’s point was that more than 20 years later people in that class still remember his introduction. The lesson for entrepreneurs? There’s a lot of noise out there, so be memorable, stand out. It’s a great point that we often think about, but only do when we are at a marketing meeting. However, we have opportunities all the time to distinguish ourselves and stand out from the crowd. Dani is a technologist and he understands the difficulty and value of being able to stand out from the crowd. He takes the opportunity when he can.

The other point Dani made focused on reputation – how you represent yourself and your business, is important to your success. Dani emphasized the right way to represent yourself and how it makes a difference on whether you succeed. In the market segment where he works (law firms), it’s a small world, and firms talk. Your reputation as a vendor travels quickly and can work for or against you. In Dani’s case, his and his team’s reputation has worked, not only for his first company, but the stellar reputation they built, which helped to build his current company as well.

Next up for alumni night was Gabriela Isturiz, a serial entrepreneur and native of Venezuela. Gaby told us the classic success story, something someone would have published on LinkedIn or in a bio. Then she told the “real” story – the story that entrepreneurs rarely hear. How difficult it is to achieve success. How the road is anything but direct. “Sometimes,” she said, “the real story is a horror story.” She illustrated the point with a picture of Edvard Munch’s “The Scream” behind her. She shared with us 10 lessons learned – things she wished she knew when starting out, because, as she said, she made every mistake one could make as an entrepreneur.

Last up, we had a great presentation by a more recent graduate and entrepreneur, Mark Visco Jr. Mark cofounded and is CEO of Suitable, a startup that began with the January 2014 Startup Weekend event held by Innovation Institute. Mark’s journey is a great story, but all the chapters have yet to be written. He entitled his presentation “Be Resourceful”. Mark’s presentation was particular applicable because he is only a year ahead of the participants in the Blast Furnace. Mark discussed the importance of having a big idea that solves a big problem. His company, Suitable, certainly does this, as it focuses on the spending in higher education that is estimated at over $460B annually, yet 50% of graduates are underemployed or unemployed.

Mark shared great chart of how his participation in a number of accelerators, including Blast Furnace partners, Thrill Mill and AlphaLab, have helped his company grow. It was captured in a ‘before and after’ list:

That’s quite a testament to what accelerators can do for startups. Money, team, product, customers. Impressive.

The journey for these Pitt grads has not been easy. They have met the challenges, and have succeeded and failed, yet continue to persist. And that may be why Dani tries to be better every day than ‘reasonably good.’ Enjoy the journey!