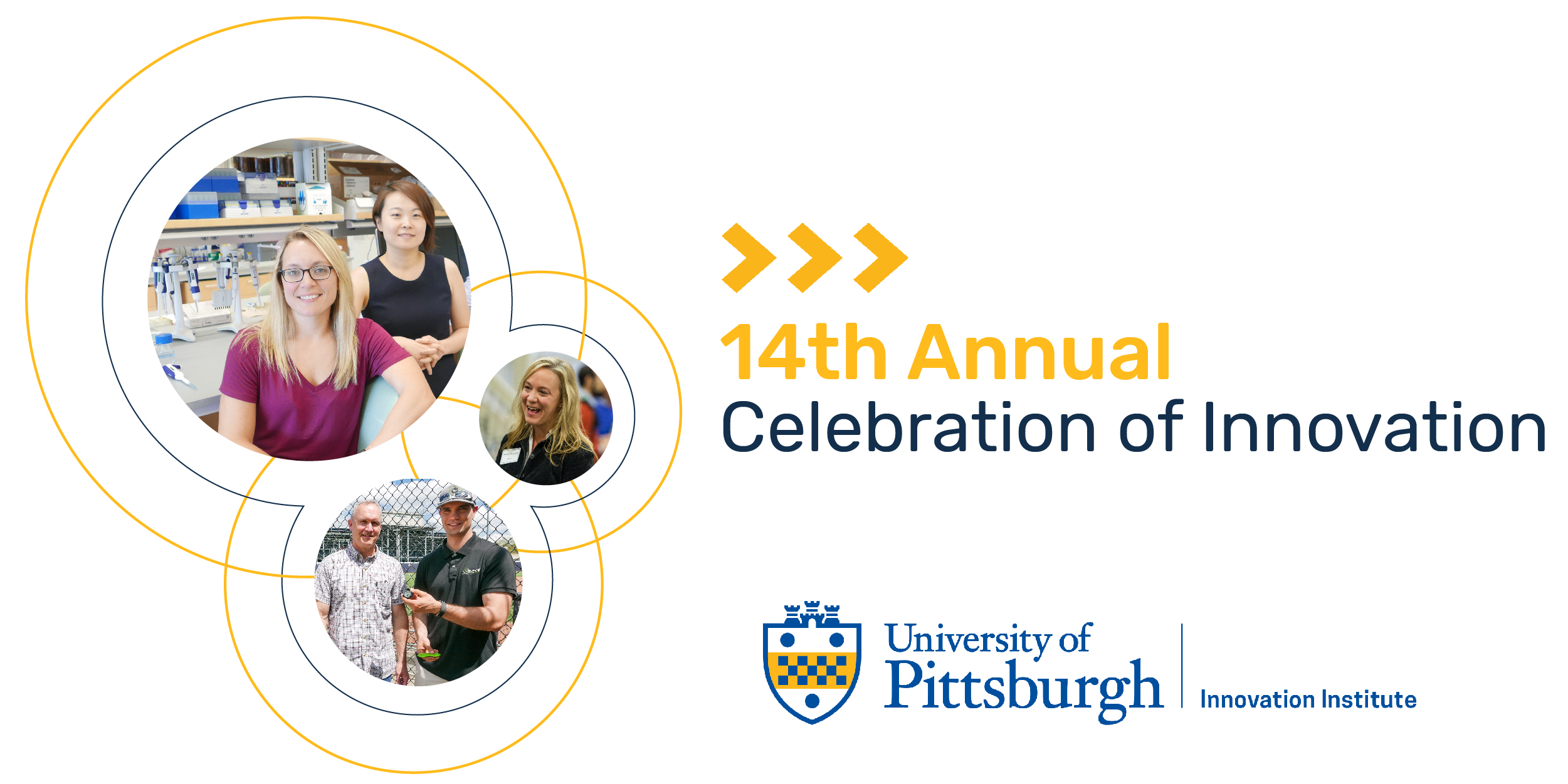 New cancer therapies, an air-powered wheelchair that can operate in places electric-powered chairs can’t, a medical device that warns a person when they should not stand up because of the potential for falling. These were all innovations licensed out of Pitt in the last fiscal year that have the potential to make life better for thousands of people.

The University of Pittsburgh Innovation Institute celebrated the Pitt faculty, students, and staff who are working to make their ideas and research discoveries have a real world impact at the 14th Annual Celebration of Innovation, on November 20, 2019, at the Petersen Events Center Campus View Club.

“Our theme this year is ‘Powering Invention. Igniting Progress,’ and there can be no denying that the growing innovation and entrepreneurship ecosystem at Pitt and in the region is igniting a firestorm of innovation across the University,” said Evan Facher, Director of the Innovation Institute.

The stats only begin to tell the story of the transformation that has occurred. In the past five fiscal years (2015-2019), the number of invention disclosures filed with the Innovation Institute by Pitt faculty, students and staff are up nearly 30 percent over the previous five-year period (2010-2014). Patents issued were up nearly 80 percent, and startups formed up nearly 150 percent.

Pitt Innovator awards were presented to the people behind the record 162 transactions (licenses/options) in fiscal 2019.

The Marlin Mickle Outstanding Innovator Award is presented to a Pitt faculty member who has demonstrated a sustained commitment commercializing his or her research and rank among the University’s prolific innovators in terms of the number of invention disclosures, patents and licenses they have been involved with.

Buddy is one of the most collaborative scientists at the University of Pittsburgh, lending his expertise to research projects ranging from pollution control valves to electronic intravenous catheters. But his true passion is baseball, as a coach, a fan and an inventor. Clark cofounded Pittsburgh-based Diamond Kinetics based on technology he developed to measure aspects of a baseball/softball player’s swing. Clark also oversees the maker spaces at the Swanson School of Engineering and inspires the next generation of Pitt student innovators as director of the Innovation, Product Design, and Entrepreneurship Program.

The Emerging Innovator Award is presented to an early-to-mid-career faculty member who has shown a keen interest in innovation commercialization and is dedicated to achieving impact through commercial translation of research.

This year’s recipient is Morgan Fedorchak.

Morgan is assistant professor of ophthalmology, bioengineering, and clinical and translational science, and leads the Ophthalmic Biomaterials Laboratory. In her lab’s first four years, it has demonstrated an intense focus on translational science and has launched two projects on a commercialization pathway, with more on the way. In that short amount of time, she has hit “Innovation Institute Bingo,” as she calls it, referring to the range of educational programming and funding opportunities she has taken advantage of to move her innovations from the lab towards the market. These include the First Gear commercialization program, the Michael G. Wells Competition, and Chancellor’s Innovation Commercialization Funds, as well as consulting regularly with licensing managers and entrepreneurs in residence.

The Outstanding Student Innovator Award is presented to a Pitt student of any level, freshman to postdoctoral candidate, who has embraced innovation and entrepreneurship as a career path and have participated in the Innovation Institute’s Big Idea Center programs and competitions to help bring their ideas to life.

The 2019 recipient is Emily Siegel.

Emily is a senior chemical engineering and biological sciences major, and is the founder of Trek, a startup company developing solutions for eco-friendly dental care for people on the go. Emily brought her chemical engineering class project idea for a chewing gum that cleans teeth both mechanically and chemically to the Big Idea Blitz event in January 2019 and won a prize in the pitch competition at the end of the weekend. She then entered the Randall Family Big Idea Competition. Competing against 300 fellow students, she and the team she assembled for the competition won the $25,000 top prize. From there, she entered the Big Idea Center’s Blast Furnace student accelerator. She is now in the first cohort of the Forge, the University’s new student startup incubator.

The James “Chip” Hanlon Volunteer Mentor Award is presented to someone who volunteers their time to assist Pitt innovation teams along the commercialization pathway. The award is in memory of Chip Hanlon, one of the Innovation Institute’s original entrepreneurs in residence who always went above and beyond to guide Pitt faculty, students and staff on their entrepreneurial journey.

The 2019 recipient is Paula Grendys.

Paula has mentored Pitt innovation teams through the First Gear commercialization program for the past five years. One of her teams is developing a wearable technology to prevent falls, from the lab of Eunice Yang, associate professor of engineering at Pitt’s Johnstown campus. That team won the top award of $20,000 in the pitch competition at the end of the program. In her day job, Paula is a strategic initiatives senior manager at the National Energy Technology Laboratory (NETL) in Pittsburgh, focusing on technology transfer and commercialization. An engineer by training, she held leadership roles at several small businesses prior to joining NETL.