From developing molecules to target drugs more accurately to the heart to new cancer therapies to an app that helps prevent falls caused by dizziness, Pitt Innovators continued to demonstrate their passion for translating their lab discoveries to solutions that make an impact on people’s lives at a record pace in Fiscal 2019.

They matched last year’s record number of licenses and options executed (162), and set a new record for discoveries disclosed to the Innovation Institute (367).

Pitt innovators were issued 91 U.S. patents and formed 17 startup companies based on intellectual property developed at the University, reinforcing a strong recent performance for those metrics.

“These results reflect the ever-strengthening culture of innovation and entrepreneurship among Pitt faculty, students and staff,” said Evan Facher, Director of the Pitt Innovation Institute. “We have been able to put more resources at their disposal to accelerate their journey on the path to market because achieving impact through commercialization has been made a top priority by the University leadership.”

In the past five years (2015-2019) since the formation of the Innovation Institute, commercial translation activity has increased substantially across numerous metrics compared to the previous five year period (2010-2014) as the result of increased funding and support for Pitt innovators since the creation of the Innovation Institute. Invention disclosures, which are submitted to the Innovation Institute by faculty, staff and students when their research produces new discoveries with the potential for commercial translation, are up more than 25 percent in the most recent five year period; licensing transactions are up 11 percent, and issued patents are up 46 percent.

Significantly, startups formed in the 2015-2019 period are up nearly 130 percent over the previous comparable period. Some of the startups based on technology licensed from Pitt in fiscal 2019 that have the potential to make significant contributions to people’s health and lives included:

Atimize: Brandon Daveler, a PhD student at the Human Engineering Research Laboratories (HERL) licensed technology he helped develop for pneumatically-powered wheelchairs and scooters. The technology was first utilized at a water park in Texas, Morgan’s Wonderland, which inquired whether HERL could develop a wheelchair that would allow children with physical challenges, who typically used electric powered chairs, to be able to enjoy the waterpark attractions without worrying about damaging their wheelchairs’ electronics. 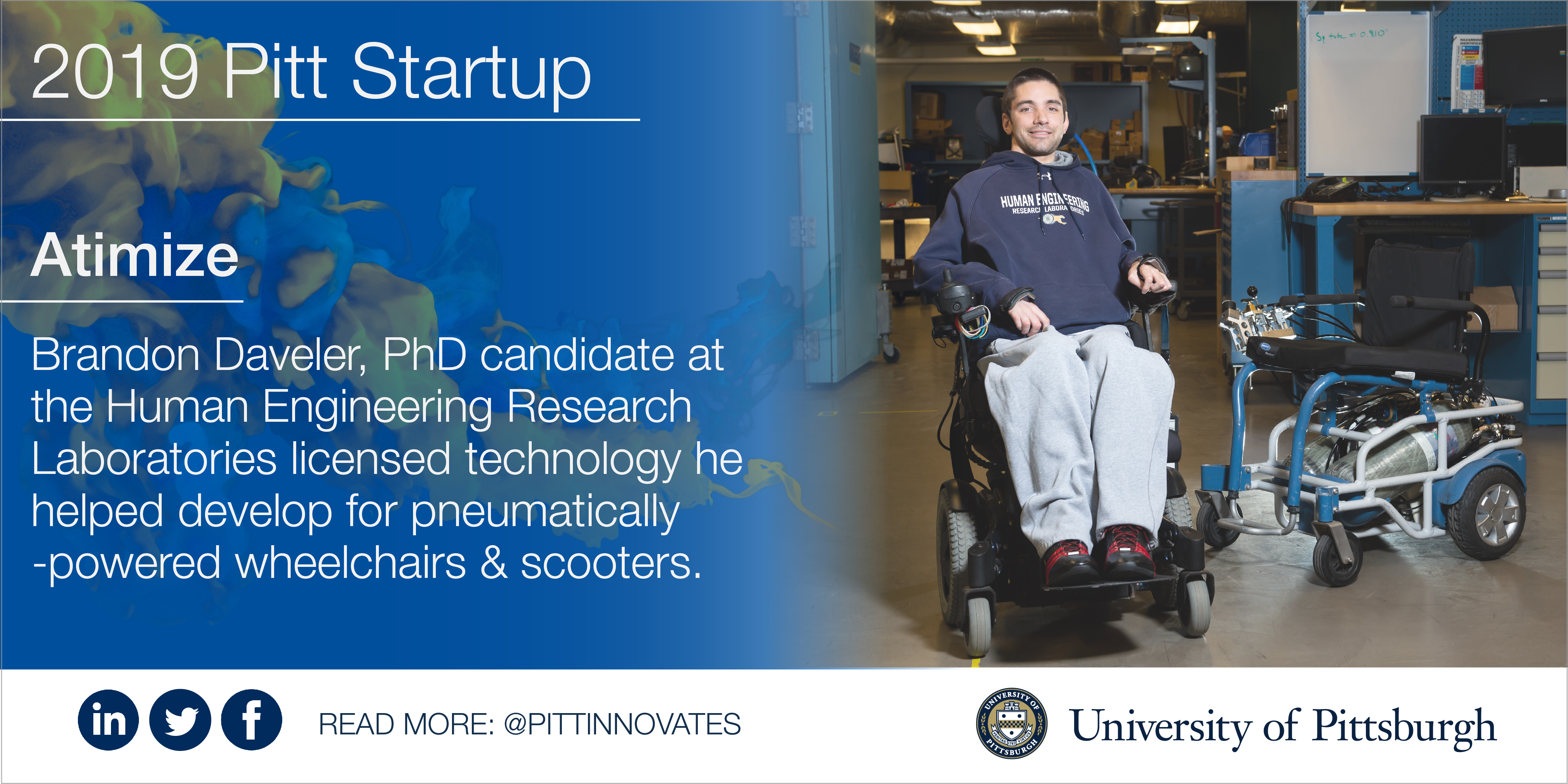 OK2StandUP(TM): Eunice Yang, Ph.D., Associate Professor of Mechanical Engineering at Pitt’s Johnstown campus, and now CEO of SmartRR Solutions, LLC is the innovator of this fall prevention medical device that can be used by professional care providers to mitigate falls due to dizziness upon standing in hospitals and long-term care facilities. It is not a motion based solution common in majority of fall-detection solutions. Rather, it utilizes an individual’s real-time health data coupled with artificial intelligence to provide early alerts to patient and care staff so that preemptive actions can be taken to mitigate falls.

DeepRX: Xinghua Lu and Gregory Cooper, both from the Department of Biomedical Informatics, have developed a clinical decision support platform for cancer treatment which utilizes patient specific data to provide therapy recommendations based on predicting tumor sensitivity to specific drugs.

Emergence Dental Inc.: Charles Sfeir, Chair of the Department of Periodontics and Preventative Dentistry and Associate Dean of Research at the School of Dental Medicine and Andrew Brown, clinical assistant professor in the Department of Periodontics and Preventative Medicine, have developed medical devices using a resorbable metal (magnesium) that can be used to improve the effectiveness of dental bone and soft tissue grafting procedures. Their initial focus is on a dental barrier membrane that provides faster, less expensive and less painful bone regeneration through the use of magnesium.

Vivasc Therapeutics: Maliha Zahid, assistant professor in the department of Developmental Biology, has identified a peptide that targets heart muscle cells exclusively, making it an ideal molecular vehicle to deliver therapeutic and diagnostic agents. It is a platform technology and can deliver myriad cargoes with the first one proposed to be amiodarone, an anti-arrythmic drug.

Student innovation and entrepreneurship at Pitt enjoyed another strong year of growth. The Innovation Institute’s Big Idea Center reported that it reached 1,975 students through its programs and events, compared to 1,566 in Fiscal 2018, and nearly double the 898 students reached in Fiscal 2017 (898).

The annual Randall Family Big Idea Competition, which awards $100,000 in prizes, saw nearly 300 students comprising 100 innovation teams compete for $100,000 in prizes, including a $25,000 top prize. From those teams, 10 were selected to participate in the Blast Furnace student idea accelerator with the goal of forming a startup company. A total of 13 teams led by students formed startups in fiscal 2019.

Some of these teams have been invited to enter The Forge, the Big Idea Center’s new incubator program established with the support of the University’s Pitt Seed grant program. Here, the teams will continue to receive education, mentorship from entrepreneurs in residence, and other support as they launch their new ventures.

One of those teams moving from the Big Idea competition to the Blast Furnace to the Forge is Trek, winner of the 2019 Randall Family Big Idea Competition top prize of $25,000. The team, led by chemical engineering students Emily Siegel and Samantha Bunke, is developing a chewing gum that removes plaque both mechanically and chemically made from biodegradable materials and targeted to millennial generation people who often go two or more days without brushing their teeth.

Finally, the Institute for Entrepreneurial Excellence, the Innovation Institute’s affiliated organization serving small businesses throughout Western Pennsylvania, is expanding its impact. During the year the IEE served 736 clients with nearly 7,000 hours of consulting services, which resulted in.

To learn more about its results, click here: http://entrepreneur.pitt.edu/what-we-do/our-results/