Meanwhile, both Four Growers and team FRED represented Pitt with distinction that same weekend as the first-ever representatives from the University at the Rice Business Plan Competition, the world’s richest and largest graduate-level student startup competition.

“It has been a watershed two weeks for student innovation and entrepreneurship at Pitt. Our student entrepreneurs are now playing in the big leagues,” said Babs Carryer, Director of Education and Outreach at the Pitt Innovation Institute. “We are proud of both FRED and Four Growers for the way they communicated the passion for their ideas and for the enormous effort they have put in on top of their other student responsibilities over the past several months.”

Four Growers is developing a robotic system for harvesting tomatoes in greenhouses and FRED is designing a flexible platform for dynamic social science modeling. Four Growers had to split the team into two in order to compete in the both the ACC and Rice competitions.

For the ACC competition, each of the 15 universities in the Atlantic Coast Conference send a representative undergraduate team. The Four Growers ACC team included Brandon Contino, recently graduated from the Swanson School of Engineering, and Dan Garcia, who is currently enrolled in the Dietrich School of Arts and Sciences studying chemistry and neuroscience.

The second place finish is the first time in the ACC competition’s three years that a Pitt team has finished “in the money.” 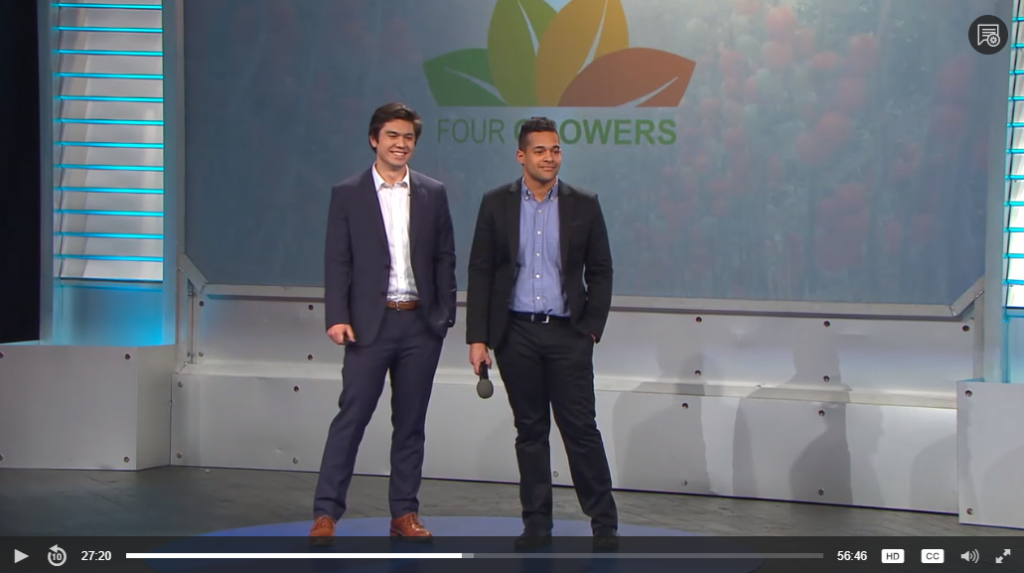 Contino, who recently received his bachelor’s degree in electrical engineering at the Swanson School of Engineering, said his team has become enmeshed in the growing Pitt entrepreneurship community. They previously participated in the Pitt Startup Blitz startup weekend and the Blast Furnace student accelerator. Four Growers took the top prize of $25,000 at this year’s Randall Family Big Idea Competition.

They have incorporated Four Growers as an LLC and have been accepted into a Pittsburgh regional startup hardware accelerator AlphaLab Gear, where they will work to refine their prototype into a marketable product. Contino added that they will be soon hiring.

“It was a crazy busy few weeks trying to balance the business and tech activities while preparing for the competitions, but the team did a great job keeping everything on track,” Contino said. “ We are very happy to have been able to represent Pitt at these national/international competitions, and we can’t wait to see next year’s teams bring home the gold. We’d like to thank the Innovation Institute at Pitt, Project Olympus, all of our advisors, and the entire Pittsburgh startup community for supporting us and helping us get to where we are today and continually propelling us forward.”

A total of 42 teams from around the world were selected from hundreds of applicants for the Rice competition in Houston, Texas, which is open to graduate students. The Rice competition awards more than $1.5 million in cash and prizes. Four Growers made it to the semi-final round of 15 teams represented by Dan Chi of Swanson School of Engineering and Daniel Hickton of the School of Law.

The FRED team is led by John Cordier of the Graduate School of Public Health and Katz School of Business. The team finished second last October in the Kuzneski Innovation Cup competition, and also runner-up as one of Pitt’s representatives in the Pittsburgh chapter of the Product Development and Management Association (PDMA) pitch competition between Pitt and CMU last November.

Opening in the 2018-19 academic year, the Big Idea center will enhance existing educational programming for budding student entrepreneurs off all levels across the University. It will also strengthen ties to the schools, clubs and other organizations across campus, as well as with the regional innovation and entrepreneurship ecosystem.