The problems a few dozen Pitt students wrestled with this semester weren’t in a homework assignment or an exam.

They were often intensely personal problems, the solutions to which they had formed into the kernel of an idea for a new product or service. To nurture those ideas they entered the 6th cohort of the Pitt Blast Furnace student idea accelerator.

The 17 student teams capped off their eight-week Blast Furnace experience with a Demo Day where each team initially had one minute to intrigue a panel of judges with their idea in order to make it into a final round where five teams would have three minutes to expand on their plans for developing their idea into a viable product or service and answer judge’s questions.

Vaidura Paladugo is also a Bioengineering graduate student who conceived an idea for a tool to navigate inside large buildings after getting lost inside UPMC Presbyterian Hospital to attend a meeting.

Kasandi Mulaa, is an undergraduate studying psychology and the arts, but she noticed a distinct lack of African cultural dining options and conceived Kasandi’s Kitchen, which aims to bring fresh, colorful Kenyan casual dining to people increasingly looking for new cuisine choices.

The winning team as determined by the judges was DisSolves, the brainchild of Jared Raszewksi an undergraduate in chemical and petroleum engineering. Raszewski said he is a regular user of protein powders and was frustrated by the process of measuring and mixing the protein drinks. His solution is a liquid mix in a naturally dissolving single-serve wrapper. He said the technology can be adapted for other beverages. He said he will use the $2,500 prize money to work on his product prototype as he continues conducting customer discovery to refine his value proposition and go-to-market approach. He was joined by Emelyn Jaros, a mechanical engineering undergraduate.

Second place and $1,000 went to the Ideal Can team, who made it into the second round as the Fan Favorite vote of the event audience at the William Penn Union Lower Lounge. Led by Brant Orlowski, an undergraduate at the School of Health and Rehabilitation Sciences, the team is developing a trash can that ties the bag and allows for simple bag removal and replacement. They are targeting the senior citizen market initially, Orlowski said.

One of the judges, Bobby Zappala, CEO of the local professional accelerator Ascender, said the Ideal Can project would be an ideal candidate for the “Shark Tank” television show.

In third place was Investing Young, the idea of Jack Glasl an undergraduate in the College of Business Administration and Mamadou Ndiaye of the Graduate School of Public and International Affairs. They are building an educational app for teaching personal finance to children aged 14-18.

Randy Eager, founder of Aqualibrium LLC and an Innovation Institute entrepreneur-in-residence, served as a judge for the first time.

“I have been to several Blast Furnace Demo Days and it was clear that the students in this cohort received excellent coaching and produced outstanding pitches. As a judge it was difficult to select the top three,” he said. 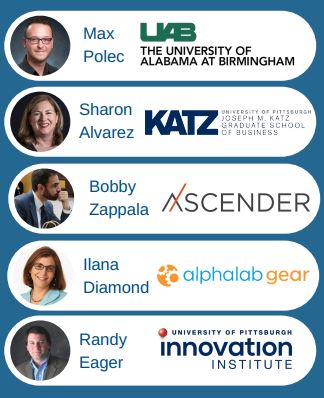 The other judges included Sharon Alvarez, Thomas W. Olofson Chair in Entrepreneurial Studies at the Katz Graduate School of Business; Ilana Diamond, Director of the AlphaLab Gear accelerator in East Liberty and Max Polec, a Pitt and Blast Furnace alumnus who now directs the student idea accelerator recently established at the University of Alabama at Birmingham and traveled back to Pittsburgh for the event.

The evening was kicked off by Barry Rabkin, a serial Pittsburgh entrepreneur and chief marketing officer of startup Identified Technologies and president of local startup networking group Founders and Hackers Pittsburgh.

Next up for the Blast Furnace teams and any other Pitt student with an idea for a new product, service, or social enterprise is the Randall Family Big Idea Competition, which is the region’s largest student idea pitch competition with $100,000 in prizes, including a $25,000 top prize.

The other participating teams in Cohort 6 include: 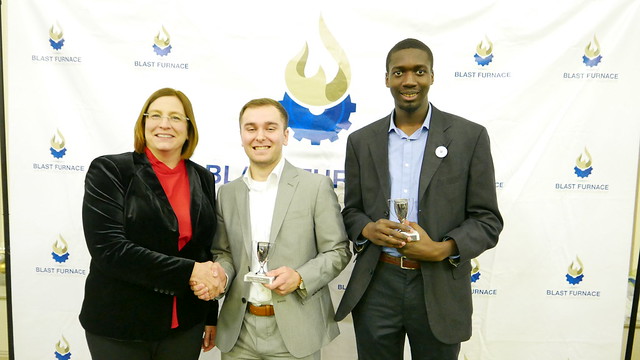 Enhancing battery performance throughout the day

Enhancing the convenience of university cafeterias with meal delivery

A game of soccer skill and technique