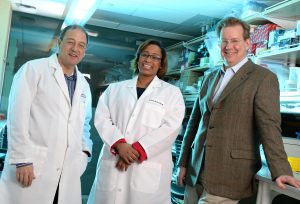 When setting out to commercialize an early-stage healthcare discovery, the vision for the way forward is rarely revealed with 20/20 clarity. Such is the case for a potentially revolutionary treatment for a pervasive eye disease developed by a cross-functional team of Pitt Innovators.

Drs. Alan Wells and Cecelia Yates have nurtured a 12-year research collaboration that has cemented the role of a class of proteins as anti-fibrotic in wound healing. Wells, along with three post-doctoral fellows in his laboratory, had identified these signaling proteins as ending the wound healing response, and causing newly formed vessels to curl up.

With Yates, they showed that these proteins worked to prevent scarring, and can drive the anti-fibrotic and anti-angiogenic effects. Yates in collaboration with colleagues at Tuskegee University, began the development of targeted peptide fragments of these proteins. Despite the incremental advancement of the science, translating these discoveries into therapies to treat disease was far from a smooth, linear journey.

“We went through a long process on how to position the innovation to go to market,” said Wells, Thomas Gill III Professor of Pathology, Bioengineering and Computational and Systems Biology at Pitt, and medical director of UPMC Clinical Laboratories.

At Pitt’s annual McGowan Institute for Regenerative Medicine Retreat, in Nemacolin, PA, Wells and Yates forged a team with the former chair of UPMC Department of Ophthalmology, Dr. Joel Schuman, and assistant professor, Dr. Ian Conner, assistant professor, in the Department of Ophthalmology. Schuman and Conner offered a new vision for the proteins that could benefit tens of millions of patients suffering from eye diseases that result from abnormal blood vessels growth and excessive wound healing, called fibrosis.

The team’s technology has been licensed from the University to a newly formed startup company called Ocugenix Inc., led by veteran Pittsburgh life sciences entrepreneur, Sean McDonald as founder and CEO. McDonald ‘s exploration fueled the company’s first targeted indications, age-related macular degeneration (wet-AMD), which is one of the most common forms of vision loss among aging Americans. With patience and persistence, the research team pursued a promising path forward in researching and developing new therapies for wet-AMD.

“I’m very excited about the potential for this company,” McDonald said. “Sometimes it can be very challenging with biotechnology biotechnology to decide what indications to pursue. The original focus on wound healing would have been very challenging to get to market. By exploring other indications the investigators were able to pivot to a potential market where existing therapies are poor and where there has been little in the way of new innovation.”

With wet-AMD, Ocugenix hopes to capture a share of a market McDonald estimates at $9 billion and could grow to $23 billion over the next seven years as baby boomers age. The market is dominated by anti-vascular endothelial growth factor(anti-VEGF) drugs. VEGF is the protein that promotes blood vessel growth, also called angiogenesis. However, for many patients the anti-VEGF monotherapy does not result in vision restoration, and some who initially improved still lose vision over time.

In several studies, the Pitt Innovators have shown that their drug limits the fibrotic response in wound healing and cause a reversion of the excessive blood vessel growth, the two most significant drivers of blindness for patient wet-AMD.

“Our drug is unique, as it targets blood vessels in the eye like anti VEGF therapy, albeit through different pathways. Our drug not only blocks the growth of new blood vessels it also causes vessel regression. This is a characteristic that is not a component of any current drugs, which can potentially restore some lost vision,” said Yates, Assistant Professor Health Promotion and Development, Pathology and the McGowan Institute of Regenerative Medicine at the University of Pittsburgh School of Nursing.

McDonald is a serial Pittsburgh entrepreneur, having also co-founded Automated Healthcare, the first robotic medication dispensing system for hospitals, which was later sold to pharmaceuticals distribution giant McKesson Corp. Wells had an inside track on luring McDonald to lead Ocugenix. Wells served as Chief Scientific Officer at Pittsburgh’s biotech startup Precision Therapeutics in the early 2000s, where McDonald was also CEO until 2014. Wells said McDonald was leery at first of joining a therapeutics startup because of the long pathway to market and the significant barriers such startups face.

“As he dug through the market and saw the business opportunity, it opened his eyes,” Wells said.

Ocugenix has received an investment of $100,000 from Innovation Works, the state sponsored seed Stage investment organization. McDonald said animal retinal studies underway at Johns Hopkins University. Successful completion of those studies and toxicology studies may lead to a meeting with the FDA this summer to discuss clinical studies that could occur in 2018, McDonald said.

Due to the primary compound’s anti-angiogenic and anti-fibrotic properties, the company has also retained intellectual property rights to clinical applications in oncology as well as other ophthalmic indications, and it continues to explore other peptides for potential development.

Yates directs a cellular and molecular laboratory investigating molecules that mediate the development and progression of fibrosis as well as she is developing small molecules and cellular therapeutics aimed at improving tissue remodeling.

“I am hopeful to see the day when our discoveries can help prevent vision loss. As for now, my job is to stay disciplined in the research to continue the pipeline of potential drug design to help this patient population,” Yates said.