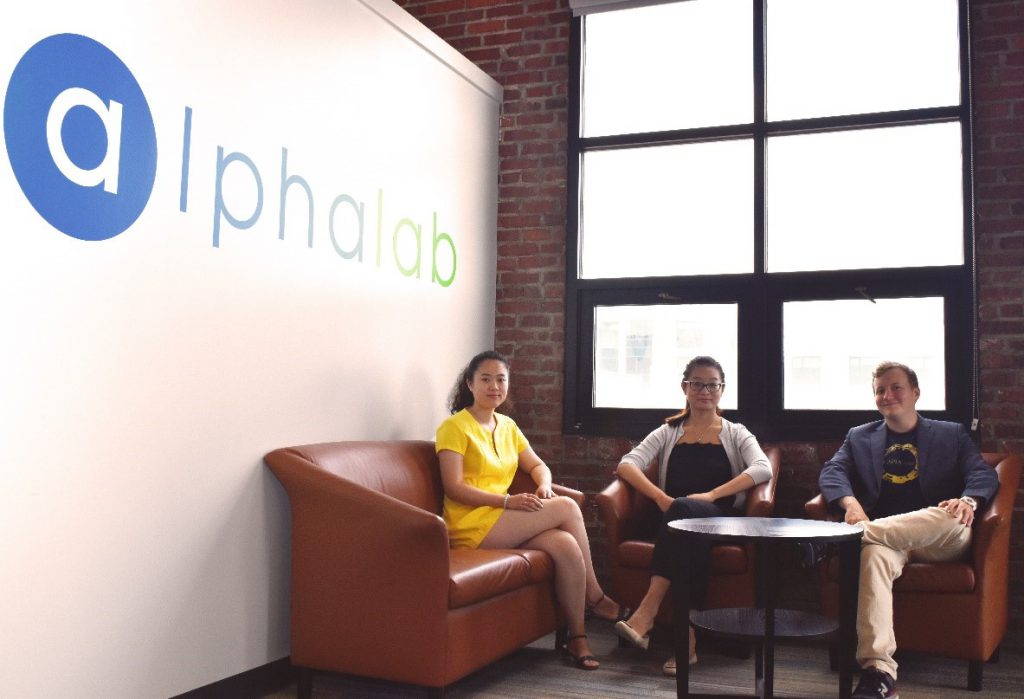 As Nicole Xu, Lujing Gao, and John Frazier sit in their new office space at AlphaLab they reminisce about how they never expected any of this.

“The three of us came up with the idea at the Pitt Startup Blitz. At the time it was just something to do for fun over the weekend. We never thought we’d suddenly become entrepreneurs,” said CEO and co-founder John Frazier.

And it certainly has been a sudden success for these recent Pitt grads with backgrounds in international affairs and business. Last December, they won the Pitt Startup Blitz and the Blast Furnace competition with their idea to solve language translation issues. Lujing explains, “It was a lot of hard work but we really fell in love, not just with the idea, but building something of our own.” Their goal is simple: “to make the translation industry a better place for all.”

Now the members of Utranslated, with their persistence and passion, have taken another giant leap forward. This summer, they were among just eight teams selected by the local and highly competitive accelerator, AlphaLab. Jim Jen, Executive Director at AlphaLab, adds that their acceptance rate is under 5%.

“Several things about Utranslated stood out during the selection process. We really liked the market opportunity that they were pursuing and believed the founders had the right background and expertise to capitalize on the opportunity.”

He also noted the progress that the company had made during the Blast Furnace by launching its service and gaining initial customers.

For Utranslated, it’s an accomplishment that’s taken a lot of work to get to. “More than anything it feels like all of the hard work we have been doing since last October is not only paying off, but this idea might just be crazy enough to work,” says Nicole.

Jim Jen expects that Utranslated will continue to knock down walls to build its business.

“In particular we anticipate that the company will continue to build out its network of translators and increase its customer base of businesses seeking its translation services. Utranslated will also test out different marketing and sales strategies to acquire these customers in a repeatable manner.”

We asked Utranslate to answer a few of our questions about their journey as entrepreneurs and their business.

How did the Pitt entrepreneurial environment help you with where you are today?

The three of us came up with the idea at the Pitt Startup Blitz. When we won the competition, we thought “this is actually a pretty good idea.” The Blast Furnace pushed three already stressed out grad students to take on extra work and further explore the viability of this idea. I truly don’t think I would be writing this from my office in Alphalab without the help of Babs, Greg, Chip, and everyone at the Innovation Institute.

What are your long-term goals for your company?

To be the world’s one stop shop for translation services. It’s a lofty goal and one that will not come easy. It requires narrowing our focus to start with two languages: English and Chinese, specializing in marketing and business communications. Making this our beachhead allows us to get this product right with a large potential market. As we grow we will expand to new languages and industries, we’ll face a whole new set of challenges and we’re excited to face them head-on.

What piece of advice do you have for other aspiring entrepreneurs at Pitt?

In the wise words of Shia Lebeouf, “Just do it!” Pitt has cultivated a great entrepreneurial environment. The Innovation Institute and the Blast Furnace provide invaluable resources and advice just waiting to be taken advantage of. Every week I see another national headline talking about the burgeoning startup community in Pittsburgh. Pitt can prepare you well to apply to area accelerators like Alphalab once you have moved on from the university. That, the incredible network of mentors, and the cheap rent means there really is nothing stopping you from going for it.

What motivated you to start this type of business?

Our backgrounds in International Affairs and Business has opened our eyes to the problems customers face. The real seed which sprouted this idea came from Lujing’s background as a translator. This is a team that has seen the problems of this industry from both sides of the table. By fixing these problems, we can help people around the world do business with each other without having to worry about the language barrier.

How is your company solving language translation issues differently then what is available on the market today?

This is a business where customers pay too much and translators make too little. Our approach disintermediates the incredibly inefficient, traditional process, allowing the creation of transparency and accountability that does not typically exist. Much of the new entrants to this industry are trying to do things as cheaply and quickly as possible causing quality to suffer. We have an extensive vetting process to make sure everyone on our platform can deliver quality work. By taking the approach of being a marketplace, we can allow customers to find their perfect translator at an affordable rate.